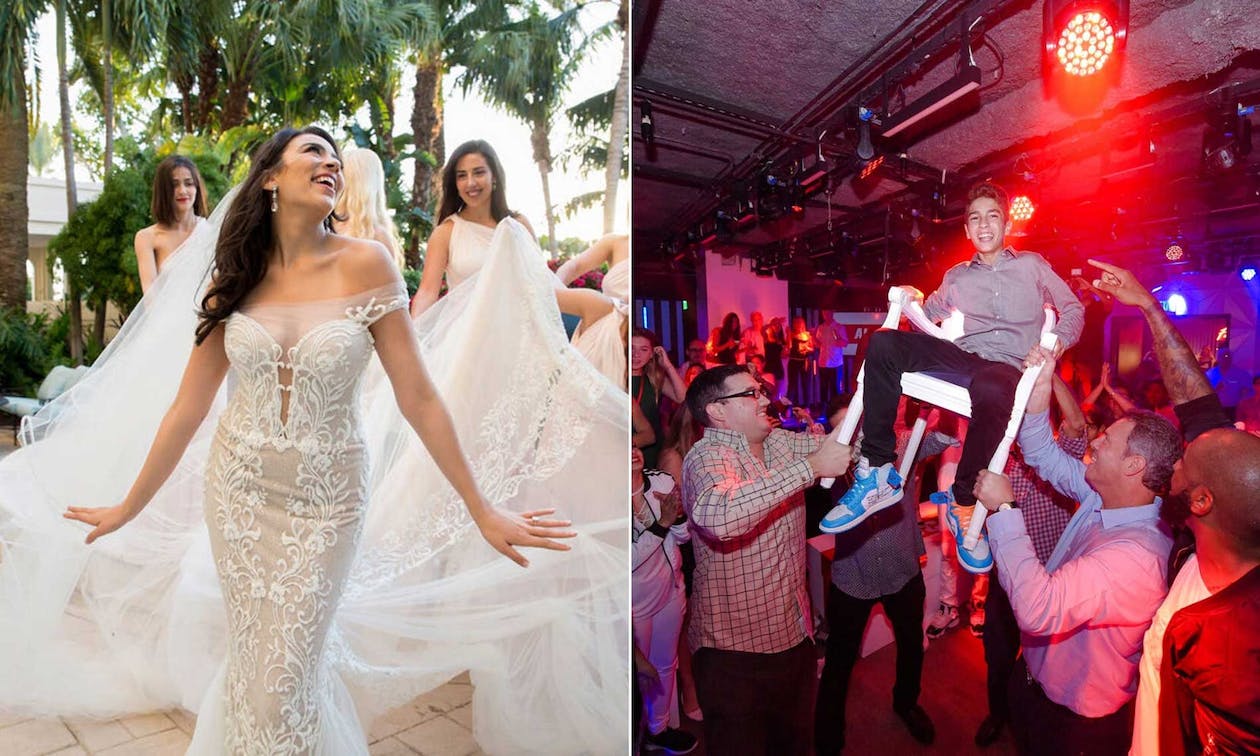 The coronavirus pandemic has created disruptive ripples felt the world over. As news on coronavirus and our national attempts to contain it changes by the moment, making decisions about upcoming events is difficult. Celebrations take time and care to plan properly, yet many are faced with having to postpone their long-awaited gatherings at the last-minute. We spoke with a bride, a Bat Mitzvah parent, and a mother planning a milestone first birthday party for insight into how they navigated the ever-changing suggested national guidelines to make proactive choices about their upcoming events.

Their responses gave us helpful insight — as well as hope. We know that the relentless single-topic news cycle will die down and “social distancing” will come to an end; and when it does, friends and family will be eager to gather together and celebrate.

Complicated Feelings Around a Tough Decision

Bride-to-be, Katie Brice, eagerly anticipated her wedding day throughout her 19-month engagement. “We have known our wedding date since we got engaged. It felt like it would never get here, then suddenly it was here — then even more suddenly, things began to change,” says Brice.

Brice’s wedding was scheduled for the last weekend in March, only two weeks from when she and her fiancé had to make the difficult decision about whether to postpone or forge ahead. “In recent days, guests started dropping out, including our flower girl,” she shares. “It was hard to continue to be excited.”

Then, when none of her fiancé’s family members were going to be able to make it due to travel and group gathering risks, Brice realized that the time had come to make a choice: have the wedding as planned without important loved ones, or postpone and wait even longer to get married. “Last Friday, when Scott [her fiancé] and I made the decision to postpone, I cried for probably five hours. Last night I was watching a show, and the characters were getting married, and I cried all over again.”

“A lot of people said it was the right decision and thanked us for watching out for everyone,” Brice says. “It’s a wedding that people didn’t want to miss — but they would have had to.”

A Bat Mitzvah Celebration Postponed on the Day-Of

This past weekend, Mira Feig led the service at her Chicago-area temple with grace and positivity as she became a Bat Mitzvah, despite the fact that many key family members were not in attendance because of coronavirus travel concerns. Her mother, Carrie Feig, spoke with us about the experience of watching her daughter become a Bat Mitzvah, and how the day changed as last-minute cancellations rolled in. She even made the tough same-day choice to postpone the evening’s party.

“Everything drastically changed so suddenly,” Feig says. “The morning of the Bat Mitzvah service and celebration, I got 10 cancellations via text. I told Mira not to pick up her phone so that she wouldn’t be disappointed. But even as we arrived for the service, we were all feeling a bit deflated. Yet Mira was so poised and did such a beautiful job, and I was touched by the number of kids who did attend.”

However, Feig says that the Kiddush luncheon afterwards didn’t feel like a celebration. “When we got home, there were more cancellations for that evening’s party, and I thought: ‘Mira is going to look around the room and not feel celebrated.’ And that’s what led to my decision to postpone this event that we had been planning for a year. I knew it was the right thing to do.”

A baby’s first birthday is always an exciting time — especially for first-time parents. You could say it’s a celebration that’s a year in the making. Marlee Somerman (who also happens to run PartySlate’s wonderfully-responsive customer success team) shared her family’s difficult decision to postpone her daughter Lottie’s first birthday party.

“Being in the events industry, I never shy away from the opportunity to celebrate,” Somerman says. “Planning Lottie’s first birthday party has brought me so much joy and excitement.”

But as coronavirus news continued to break and more restrictions were put in place, it was made clear to Somerman the decision she had no choice but to make.

“This is such a happy occasion, and I would never want that to be overshadowed by any of the common feelings of anxiety, uncertainty, and fear that we all are having right now,” she says. “So, even though the party is still a few weeks away [Lottie’s birthday is in April], we decided that the best thing we can do right now for our family and friends — and the event companies we are working with — would be to postpone the birthday party.”

Somerman notes that she doesn’t want to risk the health of Lottie’s grandparents, but also that she’s disappointed by the sudden turn of events. She says she has a boxed cake mix on hand in case she’s not able to get the professionally-baked cake she has already ordered. 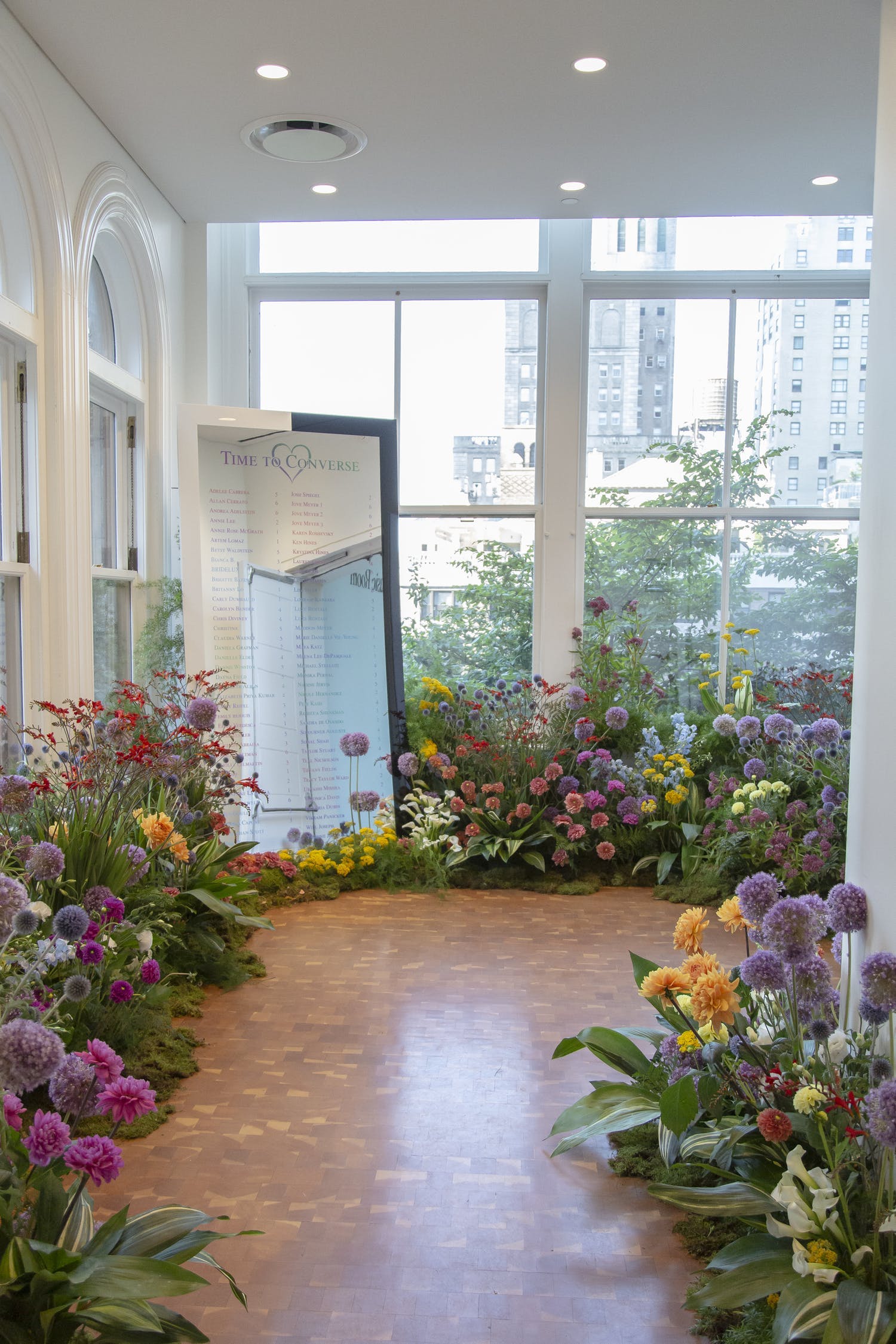 A contemporary take on one of the world’s most iconic music halls, we love the classic and upscale feel this unique venue brings to every event. photographer: Jonathan Scott Studio

All three event hosts we spoke with said that their event teams were very understanding about the circumstances. At PartySlate, we feel so honored to be part of an industry that has shown its true, beautiful colors during this difficult time.

Brice’s wedding venue remains open (with a daily deep-cleaning regimen in place), and her contacts there were very responsive and helpful with rescheduling, as were her other event partners. Brice and her fiancé also were not charged any fees for postponing and changing their wedding date.

Feig described her daughter’s Bat Mitzvah venue as “very generous” and said they were great about rescheduling the party, even though the food had already been purchased and prepared.

“When I reached out to our DJ to assess our day-of options, he said that the truck was loaded and ready to go, so I needed to make a quick decision,” says Feig. It was a high-pressure situation, but the DJ — and all of her other event partners — had empathy for her situation and were sad for her daughter. Even though the décor professional was already at the venue for setup, he, too, was gracious about the rescheduling. And Feig describes their photographer, who was present at Thursday’s Bat Mitzvah rehearsal, as “beyond incredible,” offering the family a free photo shoot on top of locking in the new date.

Regarding postponing her daughter’s first birthday party, Sommerman also noted the positive attitudes and helpfulness of the event team she had been working with. “All of the event professionals have been extremely flexible and proactive in making sure we are all on the same page,” she shares. “I have also asked if there is anything we can do to support them during this time. I think showing some love to others goes a long way right now.”

Inevitably, there are costs associated with postponing events. We’ve been heartened by the way the event community has responded with donations to local food banks and support of local charities. In Feig’s case, her daughter’s Bat Mitzvah was to be on March 14 — affectionately called “Pi Day” for the well-known mathematical formula of 3.14 — so the Feigs had ordered 250 apple pies from McDonald’s for guests to take home from the celebration. Instead, Bat Mitzvah girl, Mira, personally delivered the pies to everyone on her street, as well as to her neighborhood’s public safety department.

Here at PartySlate, we are big proponents of the “Postpone, Don’t Cancel” movement that you have probably seen flooding your social media feeds. We’re happy to report that all of the event hosts we’ve spoken to have either already locked in new dates, or they are in the process of doing so. None of them are cancelling their celebrations and moving on; instead, they are using this downtime to continue to plan, and they are eager for the gathering of family and friends that will be even sweeter once unplanned social distancing comes to an end.

Brice feels very lucky that she was able to land on a new wedding date so quickly. Weddings take a large event team to produce, and finding another date (when the first one was locked in 19 months out) is no easy feat, but all of Brice’s event partners and her venue are available for her newly-selected date in mid-May.

“It feels sort of meant to be,” she says, while also noting that she is slightly worried that even the new date won’t work out with the evolving pandemic. “My experience has been delightful compared with others,” says Brice. “My friend was supposed to get married at the end of March  and has been unable to rebook her venue until January 2021.”

It’s only been a few days since what would have been her daughter’s Bat Mitzvah celebration, and mom, Carrie Feig, is still feeling pretty sad about the whole ordeal. However, she’s heartened by the response she’s gotten from others — and the comfort of a new event date that’s been set.

“The venue was very easy to work with and gave me the next date they have open, which is in June,” says Feig. “It feels like it might be too soon, so we are also looking at September and October.” And if you’re worried about how the Bat Mitzvah girl handled the postponement, it’s good to remember how resilient kids can be. “Once Mira had the new date, she was feeling better and making TikTok clips, which anyone with a teen knows is a good measure of her mood!” says Feig.

The Opportunity to Celebrate Multiple Milestones at Once

Somerman says that her daughter’s first birthday affair will proceed as soon as gatherings are encouraged again. “We are planning to resume Lottiepalooza once festival season is back in action!” she says. “Everyone has been sending sweet notes that they will be just as excited to celebrate when the time comes — and who knows, Lottie may be able to walk into her own party by then!”

Describing herself as a “detail-oriented person,” Somerman notes that she chose a theme to carry through the party, and she will now have more time to plan all of the little touches. She says that she plans to regroup with her event team as soon as everyone is safe and healthy.

“This is the most important message I have been hearing: I feel so strongly that the events industry needs our love and support, and I have made it very clear that we will be hosting this event with all of our partners when we are able to do so!”

A contemporary take on one of the world’s most iconic music halls, we love the classic and upscale feel this unique venue brings to every event. photographer: Jonathan Scott Studio