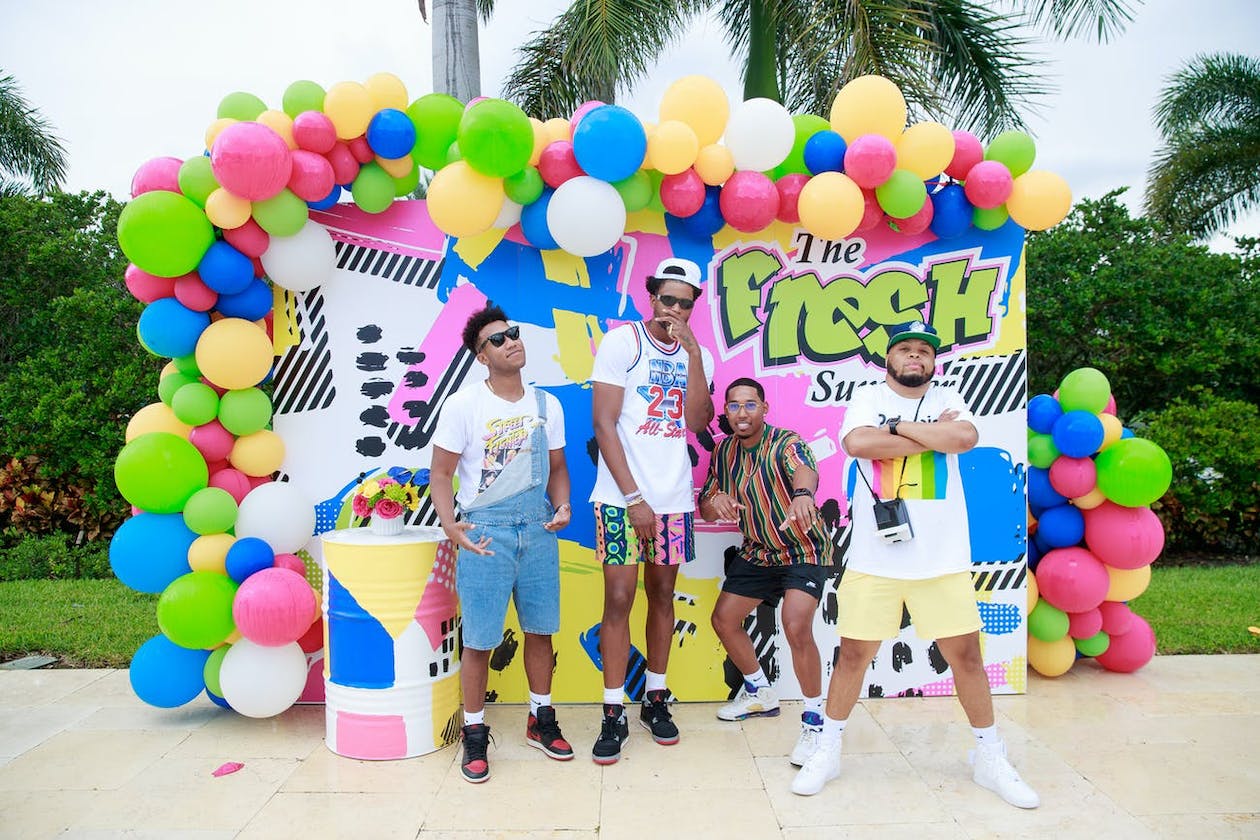 Just like 90s fashion (hello, bucket hats, overalls, and plaid skirts), a 90s theme party is making a major comeback. If you’re a millennial, the last decade of the 20th century might just be your favorite, and we’re in total agreement.

The 90s introduced us to some of our favorite artists (we love you Britney Spears), TV shows (The Fresh Prince of Bel-Air, obviously), movies (Pretty Woman will always be a classic), and so much more.

90s themes are like a box of chocolate: you never know what you’re going to get (no, we didn’t forget Forrest Gump). Whether you spent the decade discovering Pokemon, listening to Destiny’s Child, quoting Clueless, asking your hair stylist for “The Rachel,” or cheering on MJ and the Chicago Bulls, everyone’s favorite parts of the 90s are different  — and equally epic.

Scroll on to unlock a flood of fun, nostalgia-driven celebrations (you’re welcome), and to get inspiration for your own 90s theme party while finding top vendors to pull off the look.

Now this is a story all about an NBA player’s birthday (and an icon of the 90s). The Fresh Prince of Bel-Air, aka Will Smith, inspired Rudy Gay’s 33rd birthday from pool to poolside.

The party took Rudy and friends back to their childhood. Fashion, photo ops, theme desserts, and funky fonts — these photos will inspire the ultimate throwback birthday bash. We love a “party in the city where the heat is on” — as does Will Smith himself.

2. Nickelodeon Was All That

Who didn’t love Nick in the 90s? This All That-inspired party featured an epic dessert bar that honored the era. Walkman cookies, Rugrats diaper cakes, Fresh Prince of Bel-Air cupcake tower, and Baby Bottle Pops (we remember them, too) made this 90s theme party as sweet as can be.

3. This 90s Theme Table is Tearin’ Up Our Heart

One look at this LA party and you know you’ve taken 30 years off time. It’s as if the soirée grabbed NSYNC’s stage fashion and turned it into a table. Mesh lamp shades were suspended by gold chains, while loud patterned linen perfectly clashed with color-blocked place cards and menus.

4. The Fresh Food of Bel Air

If you’re looking for guidance with your party menu, these are the photos for you. We couldn’t include the Fresh Prince of Bel-Air-themed birthday without giving a major shout out to the food. From poolside bites to a 90s-inspired candy wall and completely on-theme dessert designs, this party’s catering was all that and a bag of chips (literally).

5. A Whole New World of Disney

The 90s kicked off with Princess Jasmine as the first racially diverse Disney Princess (soon-to-be followed by Pochahantis and Mulan). So what better way to celebrate the 90s than with an Aladdin-inspired twist?

This themed engagement party’s eclectic florals and neon lights certainly fit the color-filled era — and the story itself is as romantic as they get. Cue A Whole New World.

6. Wait for the Dial Tone

Millennials will love this blast from their teenage past. Bring on the acid wash jeans, tracksuits, and larger-than-our-head cellphones (if you were lucky enough to have one). This celebration’s 90s-inspired photo op saw it all. The guests’ Seinfeld-meets-Backstreet Boys fashion will inspire your future party with the best of the past.

7. Getting Busy With Missy

The NBA’s Draymond Green was thrown an epic surprise party — but the legendary theme is no surprise at all. Guests went through a time warp tunnel of Missy Eliott-inspired décor, and found themselves on the other side at a 90s nightclub.

The event was filled with cabanas, each representing a different aspect of the all star’s childhood from his bedroom to his favorite 90s video games, activities, gadgets, and more. A 6-tiered birthday cake summed the party (and the 90s) up perfectly.

Draymond Green’s 30th birthday brought 90s television sets back to life (literally). If you’re looking for photo op ideas that will take you back to ‘99, this party is chock full of them. The photo booth set up has us ready to sit back, relax, and enjoy a sitcom rerun (or pop in a VCR).

There’s only one dream team, and any 90s kid knows exactly who was on it. Dream team member Michael Jordan was the true star of the 1990s, so it should come as no surprise that anything Jordan is perfect for your throwback party.

Jordan’s iconic Jumpman logo was sprawled across napkins, signage, photo ops and more at this Bar Mitzvah party. We can’t help but love the corresponding gummy sneakers at the rim of each party drink (a slam dunk detail indeed).

10. The One With Central Perk

We never want to be on a break from our Friends, who also happen to be a fan-favorite 90s party theme. This Bat Mitzvah celebration took the group’s iconic Central Perk couch, famous theme song props, and coffee bar décor to recreate one of the most famous TV sets of all time. Let the photos inspire your own reboot.

11. As If We’d Forget Our Favorite CDs

We’ll tell you what we want, what we really really want — and it starts with our favorite CDs (hello, Spice Girls’ Spice).

This 90s rewind holiday party had no shortage, with a cascading CD installation flowing off the party’s center bar. The throwbacks didn’t stop there, with cars, TV sets, and activities straight out of our favorite decade scattered across the venue.

If you’re a 90s baby, there’s nothing more reminiscent of the era than Lisa Frank’s magical arts and crafts. Their catch phrase was on point: we had to have it — and now, we simply have to recreate this party theme. Whether you give it a holiday twist or keep it year-round whimsical, we’re loving all the ideas from this 90s party.

Give us neon lights, matching drinks, and a Tupac-filled playlist and we’ll be on 90s cloud nine. While we can’t say for certain that this Bar Mitzvah satisfied our favorite music requests, we do know it’s the perfect inspiration for your 90s Hip Hop-inspired party design.

This couple greeted guests at their wedding weekend by welcoming them back to the 90s. From a graffiti dance floor to plenty of nods to 90s hip-hop, this party was a slice of nostalgic heaven. Plus, the bride and groom-to-be sported the iconic 90s MJ jersey.

What do you wear to a 90s theme party?

90s fashion is always fun — especially at a themed party. Think one-shoulder overalls, matching tracksuits, or a Michael Jordan jersey. If you’re leaning into 90s Hip Hop go for a gold chain, bandana, oversized tee, and a bright patterned jacket. Going for a Rachel Green-inspired look? We say grab a pair of small rectangle sunglasses, a classic leather jacket, or a pair of plaid bottoms.

How do you throw a 90s theme party?

Whether it’s a birthday bash, baby shower, holiday party, corporate event, or just for fun, the first step to throwing a 90s theme party is finding the perfect venue. Once you’ve secured a venue, we suggest hiring an event planner who can help you bring your nostalgic visions to life.

Caterers and bakeries that have 90s-inspired offerings are next on the list, followed by bands and DJs that will play your favorite 90s jams all night long. You can find all of your vendors on PartySlate (along with the best theme party inspiration, of course). 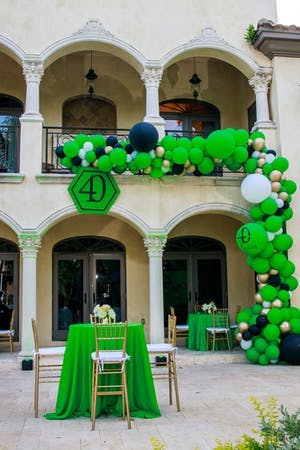 We love the creativity and imaginative design that KeAira Chantell Events brings to celebrations in South Florida and beyond. The team’s commitment to storytelling through unique design elements result in visually-stunning and meaningful affairs. photographer: Imagery by Jules

We love the creativity and imaginative design that KeAira Chantell Events brings to celebrations in South Florida and beyond. The team’s commitment to storytelling through unique design elements result in visually-stunning and meaningful affairs. photographer: Imagery by Jules