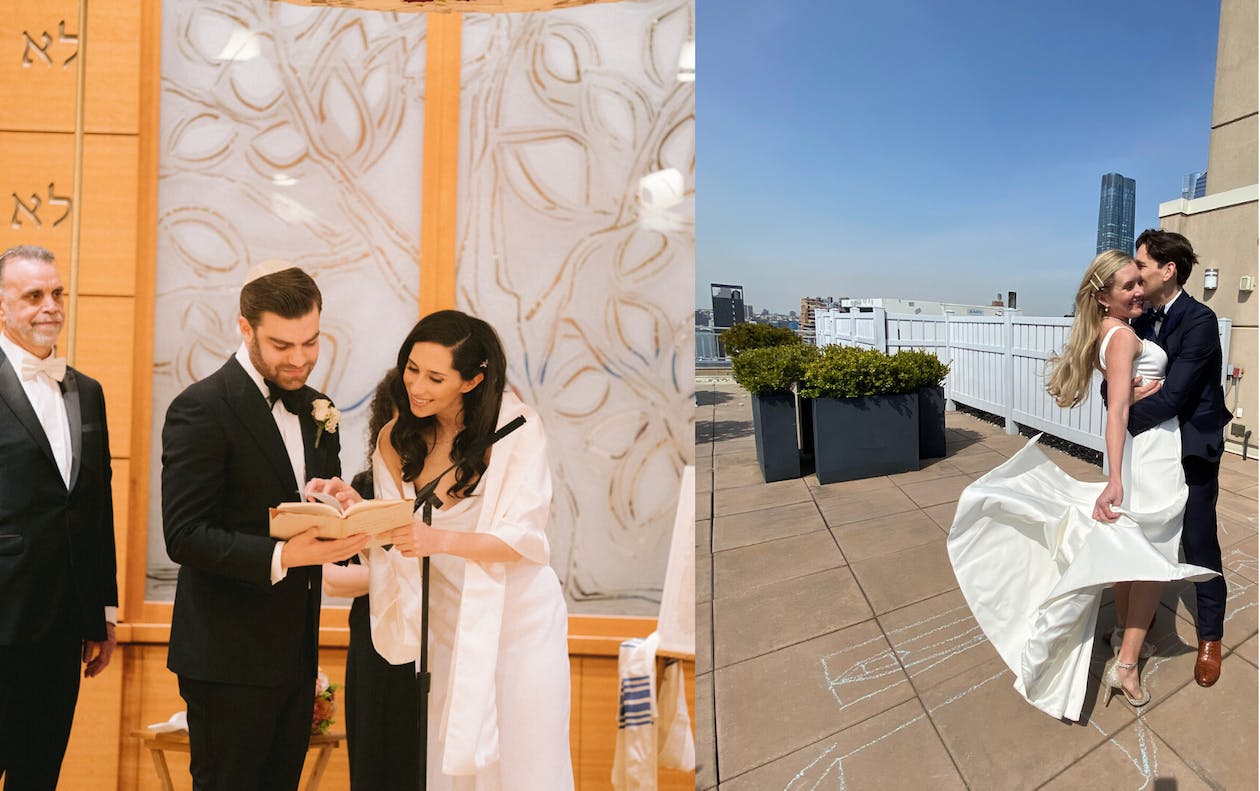 Weddings, like Rome, aren’t built in a day. As couples eagerly await what may be the most exciting day of their lives, they spend months finding the perfect venue and selecting a talented team of event professionals. Décor and entertainment are chosen. Guests are invited.

For many couples this year, those plans came to an abrupt end as COVID-19 spread across the world. We spoke with two couples who made the difficult choice to go through with a last-minute marriage ceremony — while postponing their celebrations to a later date.

Their stories inspire us to stay hopeful during these uncertain times — and never lose sight of the love and beauty in our lives. We know this time will pass, and friends and family will eventually reunite with an even greater understanding of what it means to celebrate life’s milestones together. We can’t wait to watch these two inspiring couples find a new (and just as meaningful) way to celebrate their love.

Madeline and David are no strangers to the event industry. Madeline is the Assistant Director of Banquets at Pier Sixty, The Lighthouse, and Current at Chelsea Piers. David is the Director of Operations and Services at Cipriani Wall Street and Cipriani South Street. With the help of their own expertise, along with an impressive group of top-notch event professionals, they were planning on hosting their wedding on March 21, 2020 at The Lighthouse at Chelsea Piers.

By early March, however, reports of COVID-19 were surfacing across the country. Soon after, WHO declared an outbreak of the pandemic. By Thursday, March 12, Madeline and David knew their wedding plans would have to be altered. “We were determined to get married,” they told us, “so the following six days were spent changing our plans every 12 hours based on new, available information.”

At that point, they decided to host a smaller 40-person ceremony at The Lighthouse, followed by dinner at a nearby restaurant. When restaurants began to shut down in New York City, they formed a new plan. They coordinated with one of the hotels from their room block and arranged to use the rooftop suite for an even more intimate ceremony and post party. “Then the hotel closed down, so we found a place in the Hudson River Park for a ceremony, followed by a post party at our apartment.” As gathering restrictions became limited to 10 people, they again modified their plan and limited their guest list even further.

Jenna and Michael Blaustein eagerly awaited their April 4th wedding day, the anticipation building as the date drew closer. Then, in March, everything began to change.

“Three weeks prior to our April 4th wedding date,” they tell us, “we reached out to friends and family to let them know that we would understand if they chose not to attend the celebration.” At that point, they assumed that they might lose half of their guest list. Still, they planned to go on with the wedding at The National Arts Club.

Things in New York began to change rapidly as requests for social distancing were taking effect. “We considered moving the wedding up to March 22 and having a more intimate ceremony. In an effort to prepare, we got our marriage licence March 9th, thinking the City Clerk’s office could close down soon.”

As everyone was trying to adapt to this new way of life, Jenna and Michael tried to find a way to balance having the wedding with the safety of their guests. “It soon became clear, however, that there was no way to achieve that compromise. We didn’t want to have a party and put our parents or friends in danger.”

On Wednesday, March 18, rumors began to spread online that New York would soon issue a shelter-in-place order. “That concerned us,” they shared, “so we called a new officiant we’d found (our other one had canceled) and asked if she was available any time that very day. She told us 11am.”

By that point, it was around 9am. They quickly got ready and called some friends who lived in their building, along with two of Madeline’s three brothers. They had an impromptu ceremony on their rooftop, followed by a small party in their apartment. A friend recorded the ceremony on a cell phone and another took photos so Madeline and David could share the day with their parents. While their parents were sad that they couldn’t be there, they understood, “It was about the two of us and the two of us being married. They were supportive all the way through.”

Two days later, Governor Andrew Cuomo issued the “New York State on PAUSE” plan which banned all non-essential gatherings. Under these new restrictions, and isolated from their friends and family, Madeline and David quarantine as a newly married couple. They reflected “on the amazing day as well as all the invaluable lessons we learned from the experience. We feel immensely grateful!”

On Sunday, March 15, Jenna and Michael decided to get married the next day at Temple Beth Abraham in Tarrytown, Jenna’s childhood temple. “While many people we know were postponing their weddings, it was important to us to go ahead and be married.”

Jenna’s makeup artist Natalia Carrasco rushed over and did Jenna’s makeup before the ceremony. Luckily, Vera Wang had prioritized getting Jenna her dress before they closed their shops to the public. Their photographer from Susan Shek Photography accompanied them to their temple, along with close family and two friends.

Through their temple’s live-streaming system, over 30 friends and family members were able to watch the wedding ceremony as it took place. Afterward, the phone calls and emails came pouring in. “In the end,” they share, “we ended up spending so much quality time with our guests.”

After the ceremony, Jenna and Michael went to their parents’ home for dinner — since by that time, restaurants were closed to the public. “It was a really sweet dinner and brought us back to the basics of what’s really important, like family and our love for each other.”

Thinking Toward the Future

Madeline and David had already paid their wedding vendors by the time plans began to shift. Despite that, their vendors have graciously agreed to postpone the celebration until October 11, 2020. Their wedding planner Kait McGlynn of Jes Gordon and their florist Forever in Bloom have gone above and beyond in supporting them during this time and figuring out the next step. Although Madeline and David are still deciding what this new celebration will look like, they are confident knowing that they have such a fantastic team of professionals behind them.

Although their guest list may be smaller than originally anticipated, and the flowers will inevitably have to change with the new season, they will still throw a reception at The Lighthouse at Chelsea Pier. Guests will still enjoy delicious cuisine by Abigail Kirsch Catering and dance the night away with Hank Lane Music. The reception space will still feature beautiful details by Nuage Designs and Party Rental Ltd. And André Maier Photography will still capture the beautiful moments throughout the celebration, as originally intended.

Madeline and David tell us, “It’s so hard to know exactly what to do.” But for them, it was important to keep their “eye on the prize.”

“The situation has given us so much perspective. We got to get married at the end of the day, and that is what a wedding is all about.”

Come October, friends and family will get to partake in that joy. And Madeline and David will finally get to share their newfound joy with the people that matter most.

For now, as things continue to change daily, their future plans are still up in the air. According to Jenna and Michael, “The National Arts Clubs has been absolutely amazing to work with and have gone above and beyond. They’ve let us know that we can choose to reschedule our rehearsal dinner or do something more intimate at a later date.”

Jenna and Michael know that whatever they eventually decide to do — be it a wedding, vow renewal, or more intimate ceremony — the day will look different from their original intentions. And that’s okay with them.

Jenna tells us how Michael came up with the idea of writing down all of the things that she wished she could have experienced on her wedding day. “After looking at the list,” Jenna says, “we realized the things that mattered most were being with each other and our family. It gave us a new perspective on the situation and made us grateful for each other and all of the love in our lives.”

Whatever the future holds, we know that Michael and Jenna will continue to share their love and positivity with everyone around them. 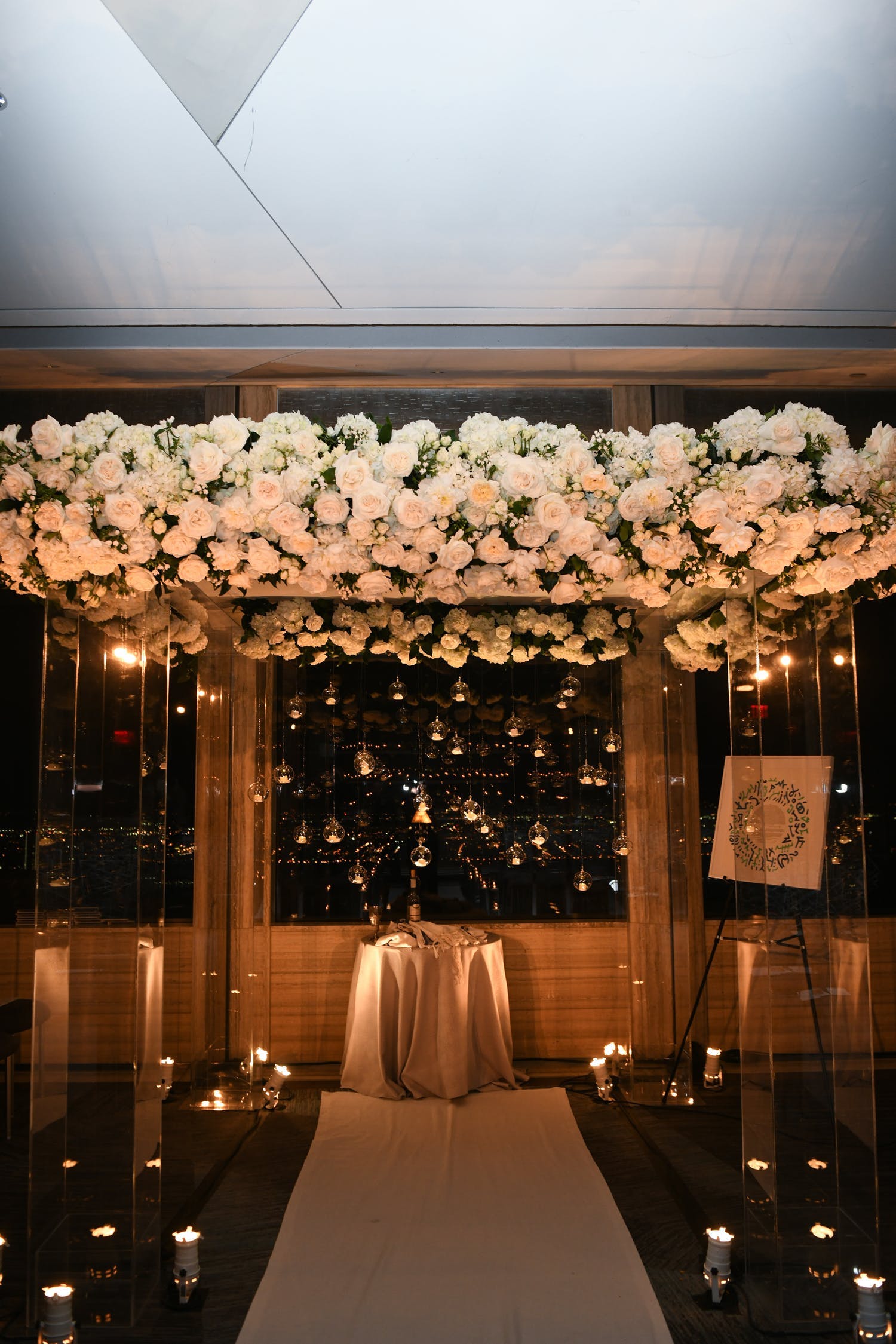 Save the Date Events has over twenty years of experience creating unforgettable events. We love Save the Date for their focus on personality, so that each celebration is an incredible experience for each of their guests. photography: Anthony Vazquez Photography