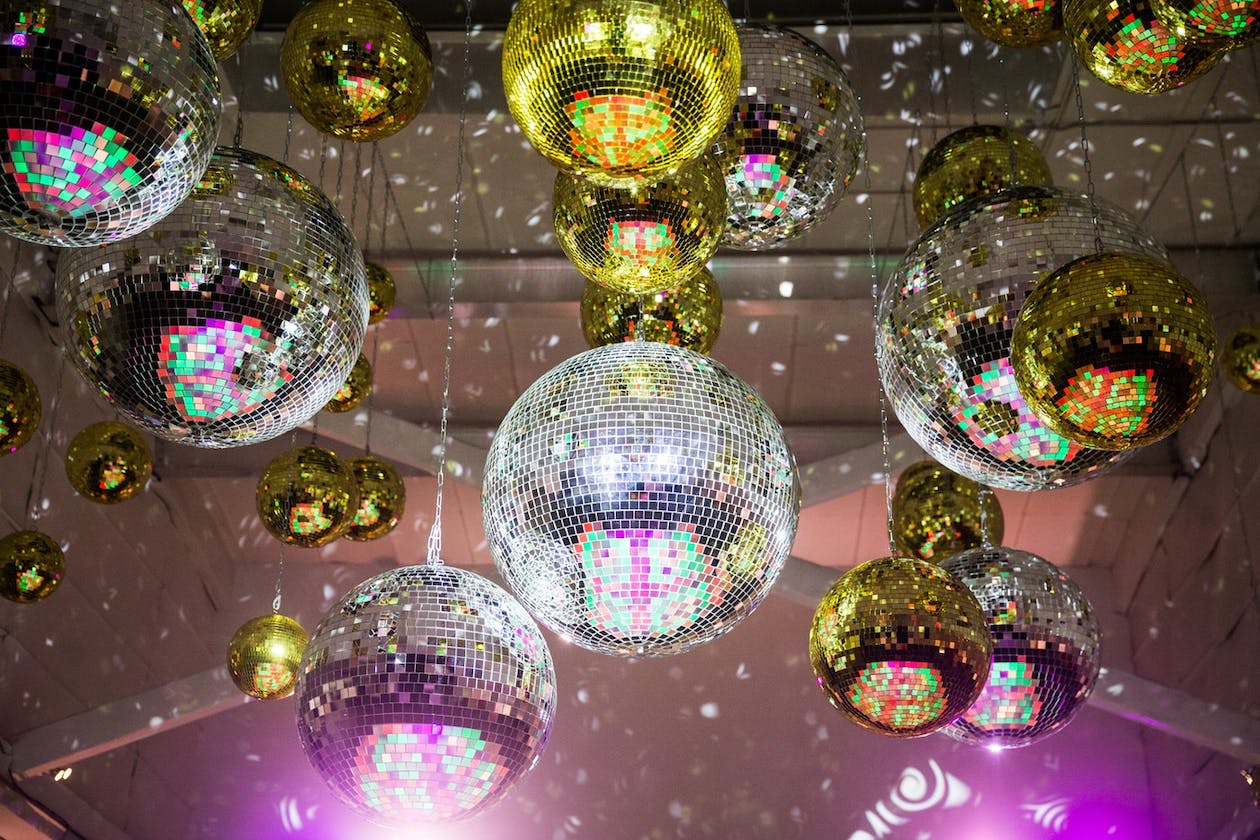 Decades come and go, but disco theme party ideas will be some of our favorites forever. From bouncy beats to hair that scrapes the ceiling and disco balls as far as the eye can see (oh how we love those disco balls), there’s nothing quite like taking your first step into a disco-themed party (and never wanting to look back).

Through the ups and downs of the 1970s came an epic era that would go down as one of the best decades in history — especially when it came to events and celebrations. Enter: the birth of our beloved disco and its parties.

Roller disco and a silent disco were merged together to create one unforgettable event experience. With a retro arcade, a throwback roller rink, and an entrance lined with 1970s music legends, this party would make moguls from Diana Ross to the Bee Gees proud.

2. Décor From the Ground Up

It only makes sense that a disco ball this grand belongs to a Las Vegas New Year’s Eve event. With a sequin-filled club and hair so big you know it’s from the 70s, this party welcomed 2020 right.

3. A Design That Has Us Spinning

Remind us to look at this design next time we’re seeking seating chart ideas. Who wouldn’t want to find their table with a turntable place card display? “Groovy glamor” was the design inspiration, to which we say, a job well done.

4. This One’s for the Girls

Who said disco is dead? Even our little ones can appreciate a good disco ball — or in this case, a disco ball-inspired party cup. We love how this at-home kids birthday party put a French twist on our favorite decade.

5. No Panic at This Disco Party

With shimmering disco ball escort cards and metallic footwear provided at the door, guests were led into this Bat Mitzvah party with a pleasant experience in mind.

The promise of comfortable feet meant there was no hesitation when it came to letting loose on the disco ball-topped dance floor — and we can’t help but dream of the day we’ll be groovin’ to our favorite tunes again.

RELATED: Add Sparkle to Every Event — Iridescent Décor is Here to Stay

6. Tinsel & Tassel Make It All Worthwhile

The queen of disco deserves nothing but the best party the theme has ever seen. The opening for The Cher Show on Broadway was filled with mylar fringe, tassels, mirrorballs, and the most iconic palette to support the era’s superstar.

Nothing embodies the 70s like a psychedelic event design. Silver streamer-covered walls paired with moody red uplighting and an on-theme DJ booth created one of the most enticing 50th birthday parties we’ve seen.

The addition of disco balls to an array of sophisticated chandeliers was exactly the party element this rustic-chic wedding needed. With spherical reflections jumping across the dance floor, no guest could resist getting up to boogie.

Are you digging this theme as much as we are? We’re obsessed with the combination of disco and dim sum at this corporate dinner party — not to mention the incorporation of sparkling sequin table linens, the niftiest menus, and kaleidoscopic wall prints.

Droga5 turned disco into an on-brand disc5 for their annual company holiday event. We love their unique take on the popular party theme, with disco balls arranged into throw pillows, the addition of gold disco balls above the dance floor, and the eclectic furniture placed throughout the party.

RELATED: 9 Neon Party Ideas that Have Us Aglow [Photos]

If disco went on a tropical vacation, we imagine it would look like this. Pampas grass — one of our favorite wedding trends — came together with leafy palms to top the party’s center disco ball in a way we never would have thought of — and now can’t live without.

One dance floor disco ball may be enough for some, but certainly not for this Bar Mitzvah boy. We’re in awe of the way the light reflecting spheres remind us of both a starry night and the infamous party era.

13. After the Party It’s the Disco Party

A modern reception gave way to an exclusive, “disco inferno” wedding after party — and we’re obsessed with every detail. The monochromatic palette, cluster of mirrored balls reflecting onto the dance floor, and retro-inspired lounge areas, ensured every guest was ready to keep the party going into the morning.

By now you know the drill: disco balls hovering over dance floors, sparkling silvers reflecting off of every corner, and the best music the 1970s had to offer filling the room.

But what you don’t know is that every groovy get together is different — including this Studio 54-inspired birthday. A living sushi display — yes, you read that right — sparkling floral centerpieces, and even on-theme bathroom décor, made this bash truly epic.

We love how every inch of this birthday party was covered in groovy elements — including the guest book corner. Illusional wall coverings and mystifying lava lamp décor proved to be the ultimate throwback elements at this foxy fête.

Michael Kors teamed up with Interview Magazine to transform a fashion-forward NYC event into a Studio 54 flashback. We never thought we’d love something more than a disco ball-covered ceiling — branded, disco ball furniture convinced us otherwise.

17. Dancing Queens to the Dance Floor

This milestone birthday party was as epic as it looks. To guests’ surprise, they were led to a private hotel suite-turned event space, where an intimate dinner turned into the ultimate dance party.

Foil fringe-covered walls, disco ball-inspired menus, and classic 1970s sweets from Twinkies to Ding Dongs made this a night they won’t soon forget.

Friday night and the lights are certainly not low. This colorful 65th birthday bash has us mesmerized from floor to glistening ceiling. Put marquee “disco” signage and a silver candy bar on our next birthday wish list.

19. Take Your Disco Party to the Desert

Desert and disco is the combination we never knew we needed. This groovy — and intimate — bachelorette party proves open air soirées with your closest friends can be just as incredible.

We just discovered tie dye florals — and we’re never going back. It’s only fitting that a 70th birthday was celebrated with the most incredible 70s décor, from a disco ball photo wall to a light up dance floor, unforgettable outfits, and costume props served to guests on silver platters. Talk about good vibes.

We’re all about adding a funky element to your wedding lounge — and this couple executed it perfectly. From the mesmerizing disco ball furniture to the complete color transformations that awaited in each room, we couldn’t have imagined a cooler wedding than this one.

A cotton candy fun room was far from the only creative set up at this corporate holiday party. That’s right: an actual “caro-soul” took guests on a ride around the party as they listened to 70s hits and danced the night away.

23. Toasting a New Decade with an Old One

What’s a better party trick than a customized cocktail? The photos from this birthday alone are transporting us 50 years backward — and we want nothing more. Put disco ball cake pops and neon party vests on our list of must-have party elements.

Vegas and disco go together like brides and bouquets. We’re obsessed with how this fun-loving bride and groom made their intimate Sin City nuptials completely their own — from their radiant, 70s-inspired outfits to their unique desert décor.

Suddenly, we want to take a disco dip. This party was ahead of it’s time — we’re talking pre Kylie Skin launch — with glistening, interactive bathroom décor for photos to remember the night with — as if guests could ever forget it.

RELATED: The 5 Most Popular Party Themes on PartySlate — Plus, Real Event Examples to Inspire Your Own

Everyone will turn into a dancing queen at a celebration like this. Pampas grass and marquee signage met illuminating disco décor to create the most glamourous, Studio 54-chic party New York City has seen since 1978.

We’re not sure if disco had ever seen daylight before, but it turns out it looks just as glam under the sun. The disco-inspired park party was the perfect combination of carnival-chic and 70s glam.

28. Call It a Corporate Comeback

What’s not to love about a product launch with a Studio 54 spin? Flashy photo ops made of metallic tinsel and disco balls (what else?) were too good not to pose in front of as guests enjoyed their time above the New York City skyline.

The party somehow merges futuristic vibes with retro glam, and we’re absolutely here for it.

29. Disco Wouldn’t Exist Without the 70s

There’s a lot to love about the 70s — and big hair is most certainly one of them. Studio 54 wouldn’t feel right without luscious locks towering the dance floor.

So we had to pay our respects to this 70s-inspired anniversary, which had guests rocking their grooviest tie-dye and even better bell bottoms (you know, the ones that make our modern flare jeans look skinny).

The rooftop event’s mobile catering station is just one of the elements we’d love at our next outdoor event.

Dancing the night away is not an experience unique to the disco era, but we sure do have it to thank for some of our favorite dance moves.

Hire a top entertainment company, like Toast & Jam DJs, to get the party going — and to keep it going all night long. This Disco fever wedding featured shining disco balls above the dance floor and a neon sign with a nod to the couple’s favorite decade.

31. Make Sure to Get All the Right Angles

One of the best things about a disco party is the photography that comes along with it. Make sure you work with your planner to create a photo booth — or photo room — where you can capture these epic moments.

How do you throw a disco theme party?

First things first. We always start by selecting a venue (or deciding to party from home). After you have a place, date, and time, hire a party planner (especially for events with over 20 guests). Your party planner will help guide you in your decision making process based on your event type (birthday, wedding after party, anniversary, and so on). And speaking of guests, invitations are up next.

Now it’s time to discover your style. Do you want to deck your party out in disco balls? Are you going for a more subtle design? We love metallic tinsel and tassel for disco theme parties, along with bold lighting (think spotlights that sway across the dance floor), and of course, you can’t count out a good DJ, band, or playlist. You can find all of your disco party vendors from caterers and florists to a/v and entertainment companies in PartySlate’s directory (just filter by company type and city).

What do you wear to a disco theme party?

Invitations set the tone for what to wear to a disco theme party, but more often than not it’s encouraged to go all out. Think bulging wigs, bright patterned tops, neon headbands, bell bottom pants (and you can never go wrong with sparkling sequins). Need some visuals? You can’t go wrong with boots like these, dresses or jumpsuits like these — or take it in a more casual direction with an outfit like this. 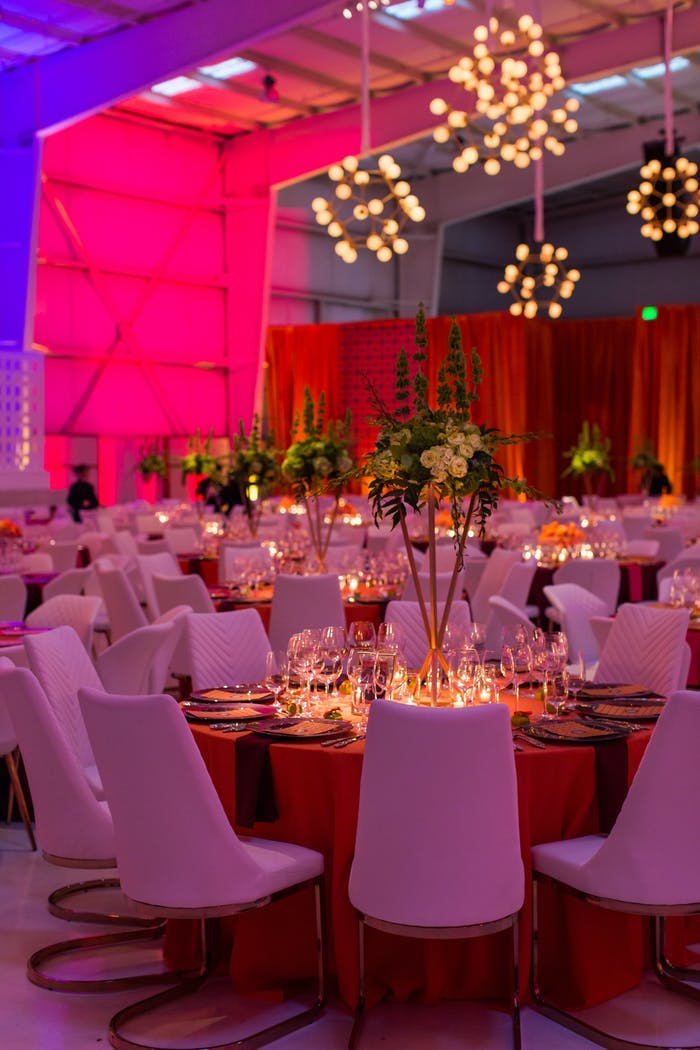 From logistics to installation and more, Blueprint Studios knows how to create the most memorable event while incorporating unique and customized visual identity designs. photographer: Show Ready Photo

6 Creative Cocktails Ideas for Your Party

From logistics to installation and more, Blueprint Studios knows how to create the most memorable event while incorporating unique and customized visual identity designs. photographer: Show Ready Photo

6 Creative Cocktails Ideas for Your Party