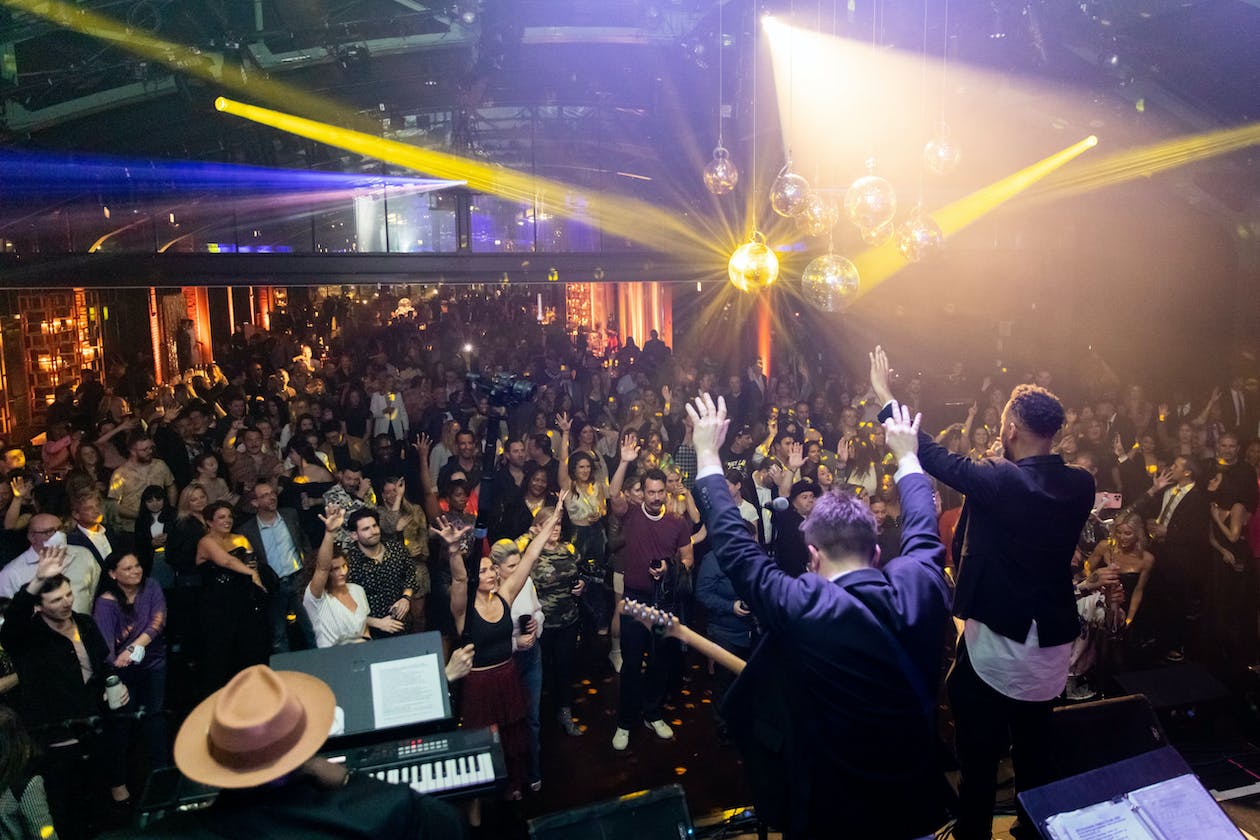 Renowned band collective Gold Coast Events celebrated their long-awaited (due to pandemic postponement) 10th (now 12th) anniversary with a show-stopping bash in Chicago. Guests enjoyed delectable food, creative cocktails, and, of course, stellar performances by Gold Coast artists, including in-demand band, The Gold Coast All Stars. The night was full of lively music and dancing as the All Stars, once again, set the standard for live event bands.

We sat down with Danny Chaimson, founder of Gold Coast Events and member of The Gold Coast All Stars to find out more about the epic company anniversary party (that was really more of an epic concert).

1. Tell us how your anniversary bash came to be.

At our weddings, people always say that what we do is like experiencing the greatest concert ever with all of your family and friends. I wanted to take that a step further and really throw a concert — with full-on concert lighting and production —  that all of our industry colleagues could attend, relax, and enjoy as a way to re-emerge after all of the troubles and travails of the past couple years.

It was also a really cool chance for all of the insanely talented people who make up all of the bands in the Gold Coast Events fam to celebrate our success together — and actually watch each other perform along with their significant others (which never gets to happen). It was really a special night.

2. Who were your key partners and their roles in making the Anniversary Bash a successful gathering?

Rachel De Marte planned the event, and she did an amazing job. She’s so creative and FUN and we get along really well. And she really got the vibe of what I was going for — it was just as much a concert as it was a party.

Marley and Bari at HMR were on board from the get-go. I told them to just take the ball and run with it. They literally did that — but with a disco ball! They put together an amazing floor plan that incorporated a LOT of disco balls along with black and gold (a nod to our company’s colors) with sleek, sexy vibes. It was extremely cool.

Jeffrey and the crew at Frost swung for the fences with the concert lighting, and it was a home run. I told them to pull out all the tricks they’d been waiting to use, and we were able to pinpoint a couple epic moments during the event to really have jaw-dropping lighting to match musical moments that were happening. There was a moment during Talking Heads’ “Burning Down the House” where they focused lighting on a bunch of disco balls that started spinning right as the music built to a feverish crescendo. It was truly a transcendent moment! And exactly what I was going for.

Julie Fitzgerald and Entertaining Company created an amazing spread.The idea was elevated concert bites. The beef wagyu sliders were legitimately the best I’ve ever had! It was really wonderful having Julie be a part of this; she and her team are the best.

Other vendors also helped make it an epic party. Casamigos went above and beyond with awesome ice luges. Party Can had a super-cool girl riding around on roller skates handing out shots. High Minded offered creative cannabis-infused cocktails.

Colin Lyons killed the photo game, and Highway 61 is cooking up an amazing video recap. Beforehand, Charlie Hilbrant provided an incredible highlight video for the event that kicked off our performance. We had the best event team and all of them contributed to a totally memorable night.

3. What’s one moment or experience that stood out to you?

For me, the most rewarding part of the night was the beginning of The Gold Coast All Stars’ set. The lights dropped down and we showed the video from Charlie Hilbrant that encapsulated the past 12 years of the band. It showed where we came from, where we are now, and how we got there.

You could feel the anticipation really building, and it led into this incredibly delicate moment where a spotlight came down and the band went into the chorus of The Roots/Erykah Badu’s “I Got You” that slowly transformed into the chorus of Kanye West’s “Stronger” — and ultimately burst into Stevie Wonder’s “Superstition” with the full power of the 15-piece band and cold fireworks bursting as the verse hit. It was truly a wow moment and, in a way, perfectly exemplified the creativity, passion, taste, and raw talent that goes into everything we do. It was awesome to see.

The members of all four of our bands rooting for each other during their performances was amazing to see as well. We also got so many thanks from our industry pals who really got to kick back and rock out with us without having to worry about anything else. It was a really satisfying experience in so many ways.

Where should I start when planning a company anniversary party?

When you’re planning a company gathering, we recommend starting by securing your event planner. Do some research to figure out who matches your style and will help you achieve the goals of your event. Your planner will guide you through the rest of the process, assisting you in choosing everything from the ideal venue to the best caterer and the perfect décor.

Entertainment is also key; nothing makes a corporate event stand out like a performance or experience that wows. Through PartySlate, you can search for planners, venues, entertainers, and more at the click of a button. By utilizing a variety of helpful filters, you’ll be matched with potential industry pros who fit your needs exactly. 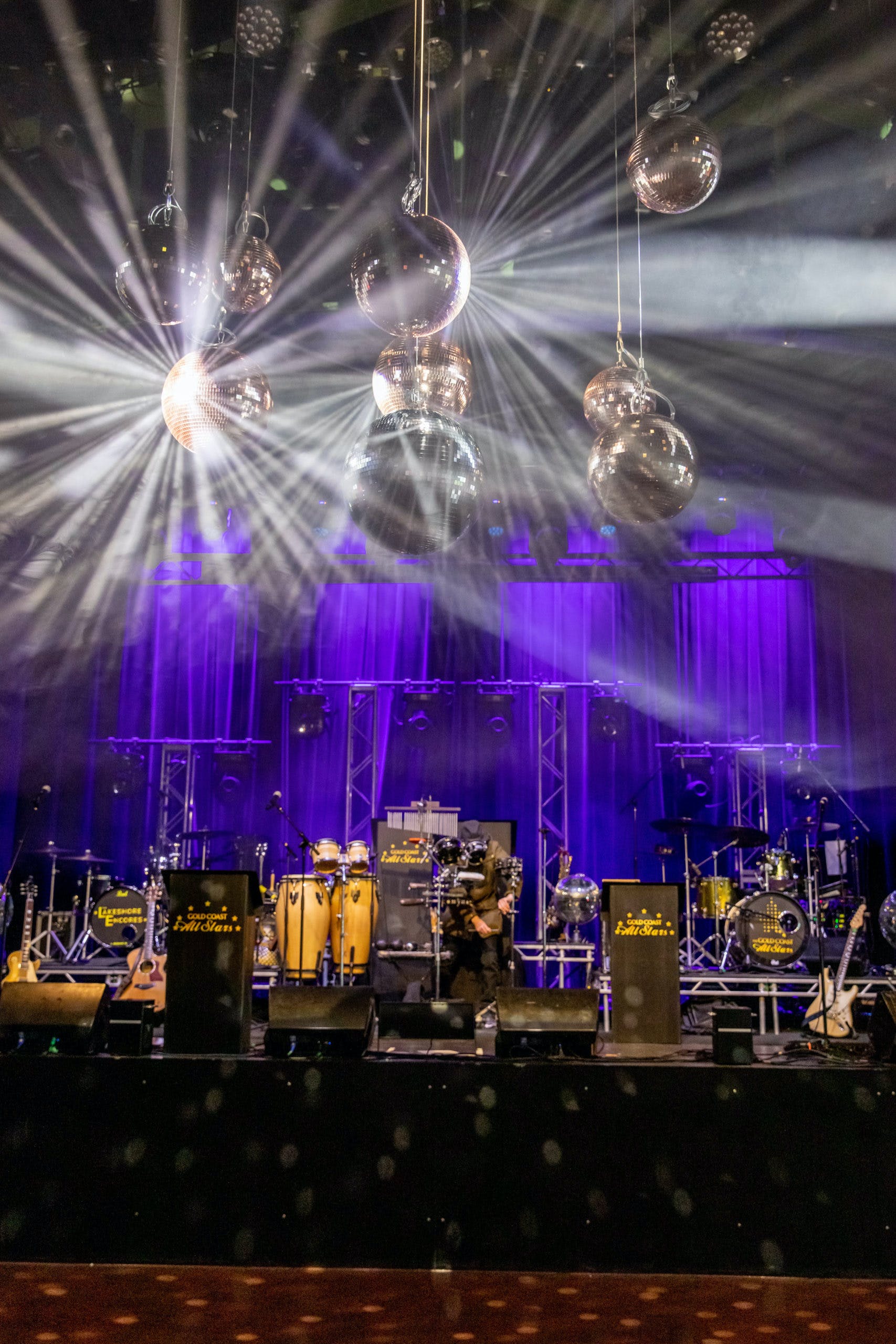 We love how these uber-talented musicians somehow manage to sound like the real deal on every song, in every style, while also creating a sound that’s alive with energy. They create a fun dynamic with guests at events, engaging them in the music and their performance. photographer: Colin Lyons Wedding Photography

6 Décor Ideas For Your Corporate Event

We love how these uber-talented musicians somehow manage to sound like the real deal on every song, in every style, while also creating a sound that’s alive with energy. They create a fun dynamic with guests at events, engaging them in the music and their performance. photographer: Colin Lyons Wedding Photography

6 Décor Ideas For Your Corporate Event