With the latest finale of the The Bachelorette franchise resulting in another engagement — Becca Kufrin said “yes” to Garrett Yrigoyen — and the craziness of Bachelor in Paradise well underway, we’re reflecting back on The Bachelor & The Bachelorette couples who made it past the final rose.

Way back in 2003, the Bachelor franchise saw its first wedding with Trista Rehn marrying Ryan Sutter. The show’s network, ABC, created a short list of planners, from which the couple chose celebrity event planner, Mindy Weiss, founder of Mindy Weiss Party Consultants. She went on to plan three of the seven Bachelor Nation nuptials, so far. We asked Weiss to share what it was like working with these media-made couples.

“ABC really does want all of their couples to have the weddings they envision, but they’re committed to do certain scenes for the show,” says Weiss. “It could potentially detract from the romance of the moment but usually ends up adding more excitement instead.”

Planning a televised wedding presents other challenges, like issues of scale. Weiss says, “Everything had to be on a grander scale — with more flowers, more candles, and more décor — because the cameras film from so many different angles.”

We did some digging to find all the details about the skilled event teams who worked together to make these made-for-TV weddings seamless and stunning. 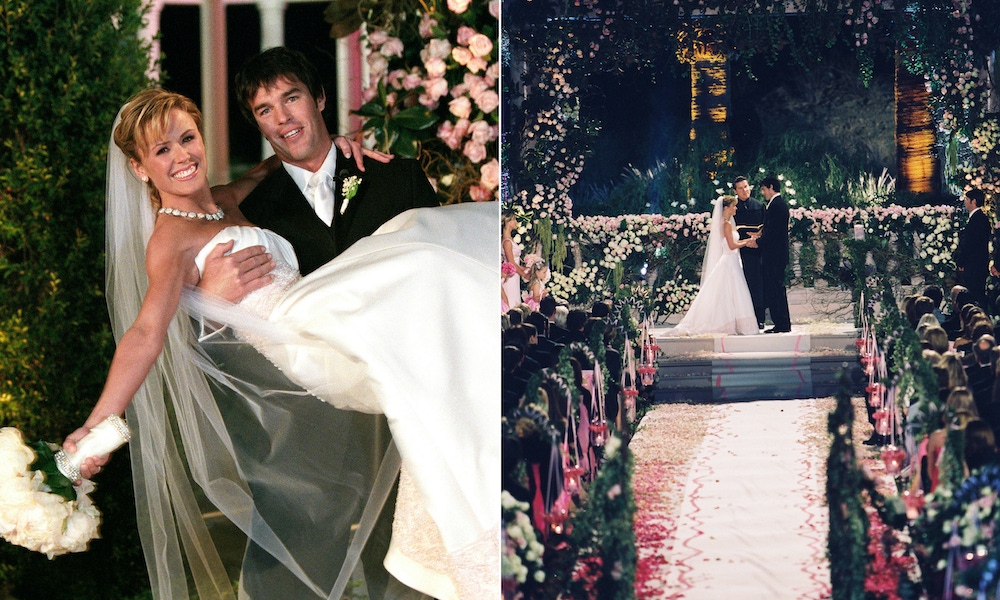 Bachelorette Trista and her suitor, fireman/poet Ryan — the couple that started it all — met on Season 1 of The Bachelorette and were married at The Ritz Carlton Rancho Mirage near Palm Springs, California in December 2003. Their event, planner, Weiss, says, “The turnaround time was short, with only four months or so to plan the entire event.” Weiss did a lot with that little bit of time though, resulting in a lavish TV-ready wedding.

“Trista wanted everything pink,” says Weiss. In response, Original Runner Co. created an aisle runner with a 150-feet of hand-painted pink ribbon with a huge bow, while Mark’s Garden lined the dreamy aisle with petals in hues fading from fuchsia to blush into ivory for a chic ombre effect ending at a towering floral arch under which the couple said “I do.” Fittingly, there were 30,000 roses on hand at this most meaningful of all rose ceremonies.

The gorgeous reception included a luxe wedding cake designed by Sam Godfrey at Perfect Endings and a surprise serenade for Trista from country singer, Brad Paisley, as arranged by romantic beau, Ryan. Trista and Ryan now live near Vail, Colorado with son, Max, and daughter, Blakesley. 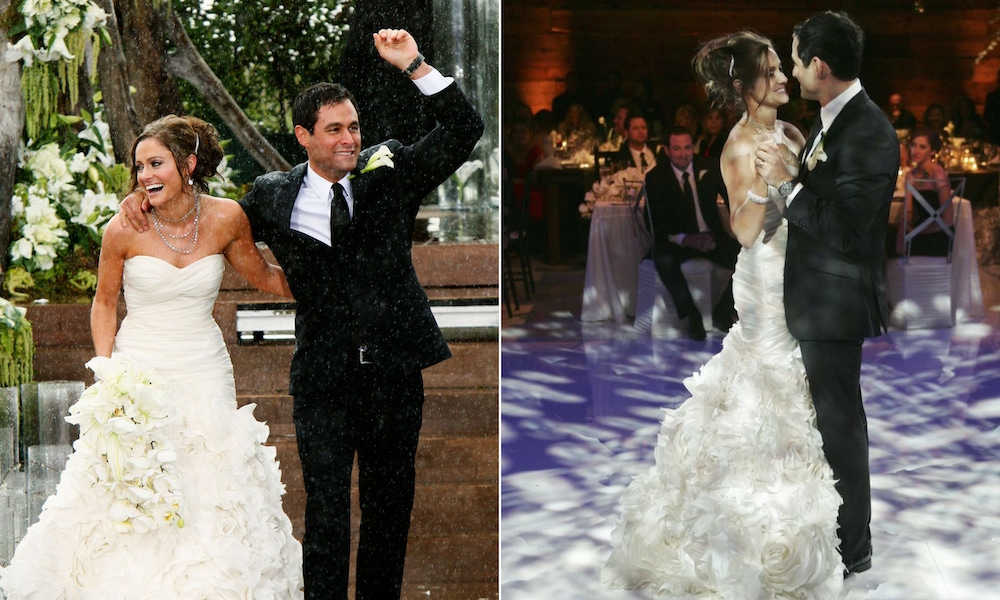 While Jason Mesnick wasn’t always great at making tough decisions, he proved to be very decisive with décor choices for his incredible wedding to bride Molly Malaney. The couple worked with Jo Gartin of Love Luck and Angels to create their dream wedding. The Terranea Resort on the coast of Rancho Palos Verdes, California proved to be the perfect oceanside spot offering sweeping views of the Pacific Ocean for the outdoor nuptials.

The luxe décor from Eden Rodriguez of End Design included white lilies and orchids and tall glass hurricane candles lining the aisle. Despite a downpour (that’s not rice they’re being showered with in that photo) leaving the couple soaked during their vows, the lovebirds smiled triumphantly on their walk back down the aisle hand-in-hand.

The reception, with performances by Gavin DeGraw and Jason Castro, was a smashing success, and photographer Robert Voets captured every beautiful detail. Molly and Jason now happily live in Seattle with children Ty (from Jason’s first marriage) and Riley. 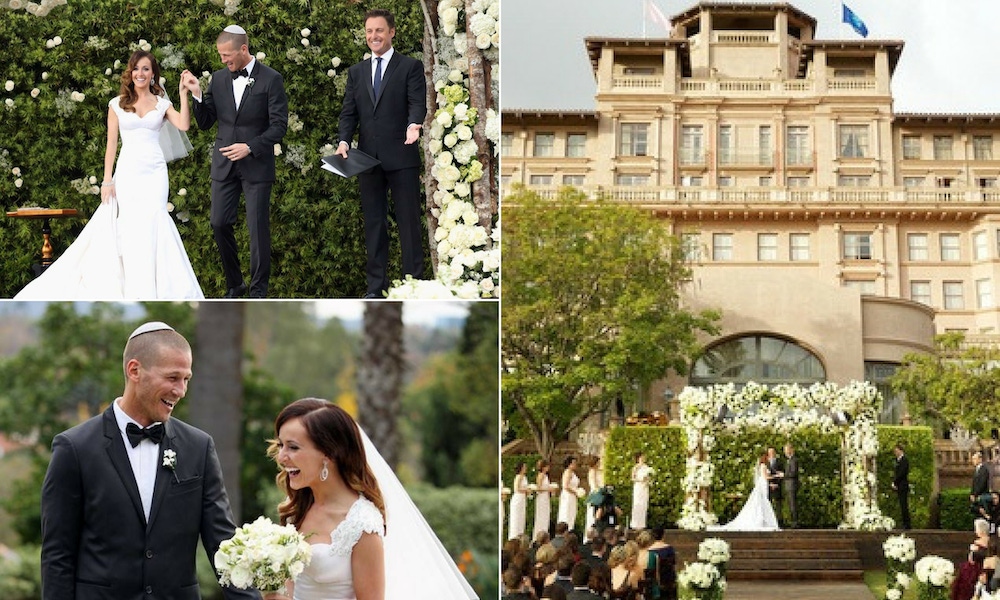 Ashley and J.P.’s romantic ceremony was held on the lawn of the elegant Langham Huntington Hotel in Pasadena, California and featured an incredible reception in the historic Viennese Ballroom and Terrace. Mindy Weiss planned yet another dreamy wedding, with every detail chic and camera-ready. A gorgeous traditional chuppah constructed with birch trunks was decorated with blush, ivory and champagne-hued florals from Mark’s Garden and backed by lush greenery. 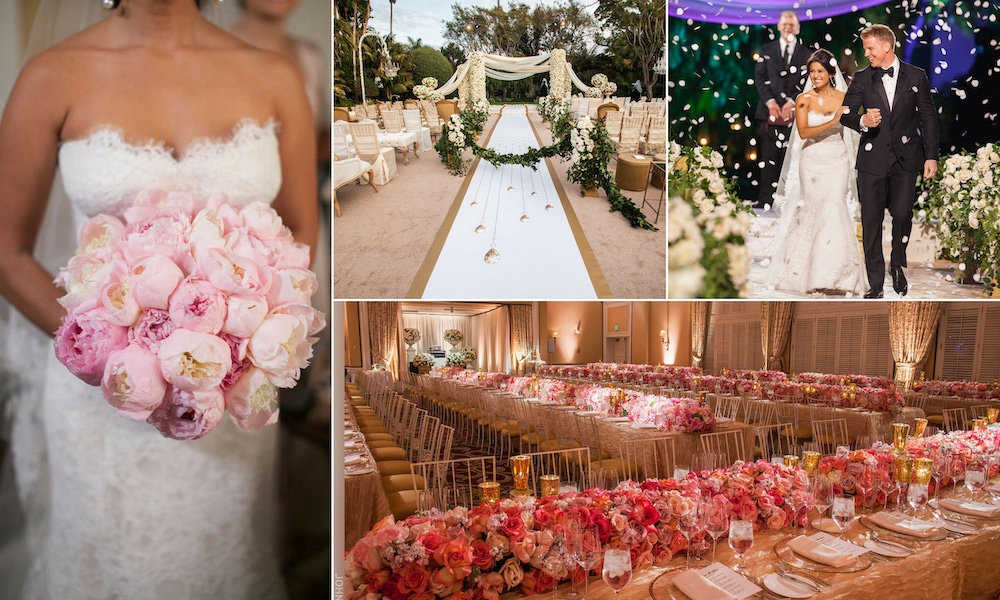 Sean and Catherine’s wedding coverage started early, featuring behind-the-scenes footage of everything coming together in the days leading up to the big event. Can you guess their event planner? If you guessed Mindy Weiss, you’d be correct! She worked with the The Bachelor couple to curate an incredible “grown sexy” (as requested by the bride) ceremony and reception. Held at the beautiful Four Seasons Biltmore Resort in Santa Barbara, California, the couple walked down an aisle studded with hundreds of Swarovski crystals surrounding hand-painted pearls in a grid pattern from Original Runner Co. The pair said their vows outdoors surrounded by lush white floral arrangements and greenery from Mark’s Garden. 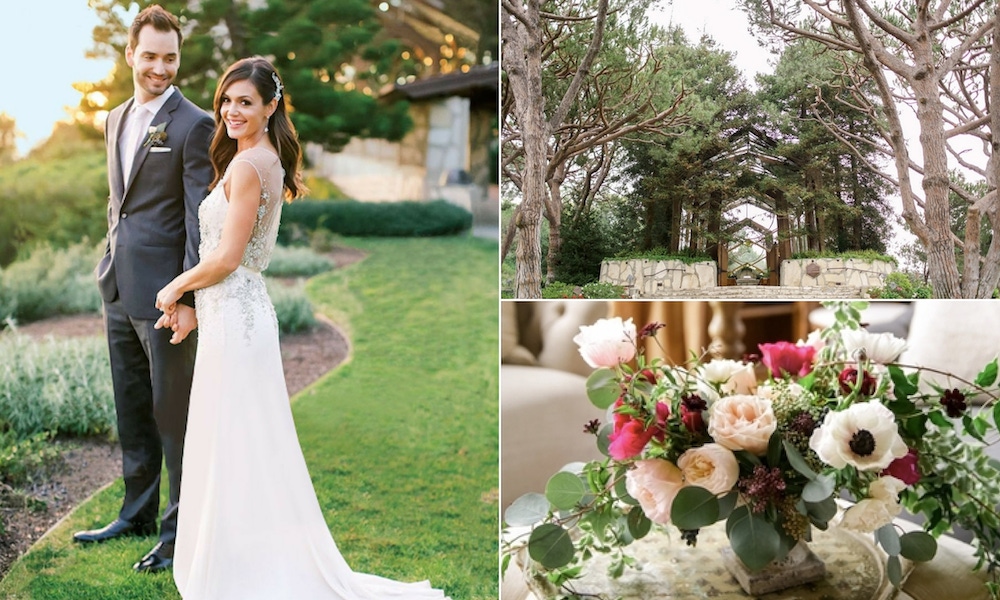 Bachelorette Desiree, a wedding gown designer and stylist herself, said vows to her chosen one, Chris, beneath the redwood trees of northern California in the stunning wood and glass Wayfarer’s Chapel.

The couple continued the celebration at the Redondo Beach Historic Library, and Steven Moore of Sinclair & Moore Events wove vintage books into the décor in a nod to the studious spot. Raw wood tables paired with unusual pink, white and red florals for a beautiful rustic reception vibe. The team at Chic Celebrations brought the event to life with help from Found Rentals and La Tavola Fine Linens. Desiree and Chris have a son, Asher, and a second on the way! 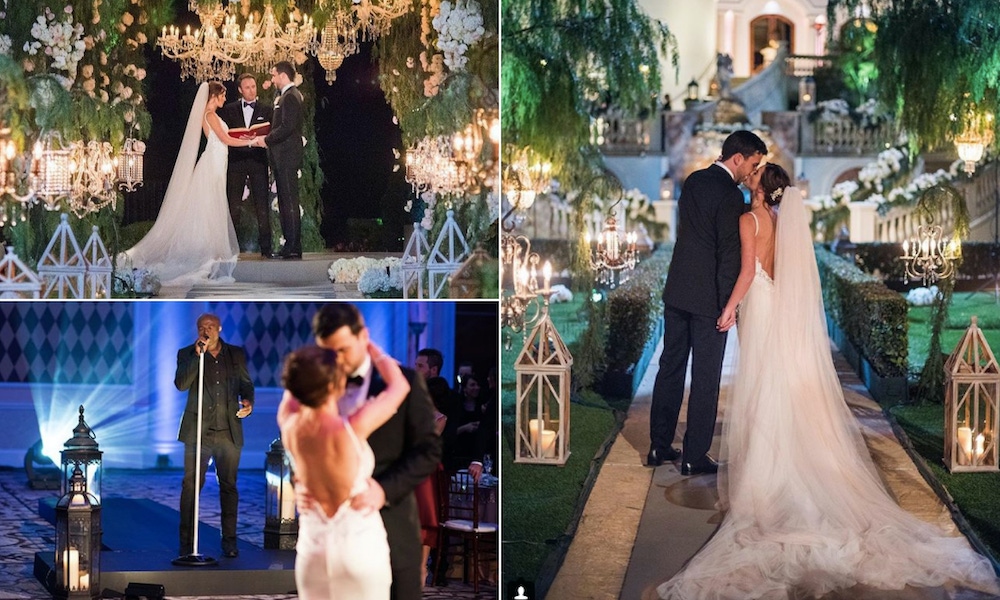 Sure, Bachelor in Paradise boasts lots of couplings, but then almost as many un-couplings — often within the same episode. So you can imagine our thrill at the success story of Jade and Tanner, who met on the spin-off of The Bachelor.

Jade Roper and Tanner Tolbert said “I do” at the gorgeous St. Regis Monarch Beach, an incredible seaside venue reminiscent of where the couple first fell in love on Bachelor in Paradise in Sayulita, Mexico. Lush floral arrangements by Flower Me Wild, as well as rentals by Found Rentals conjured magic with dreamy blooms and chandeliers hanging everywhere in the outdoor space, creating a glam secret garden feel. Photographer John & Joseph Photography captured every special moment at the fairy tale wedding.

The fun reception featured stand-out performances by Matt Nathanson, Seal (singing “Kiss from a Rose” for the couple’s first dance), and BIP’s own cruise singer Carly Waddell (more on her in a moment), who penned a sweet song for the couple. Jade and Tanner welcomed daughter Emerson in August 2017. 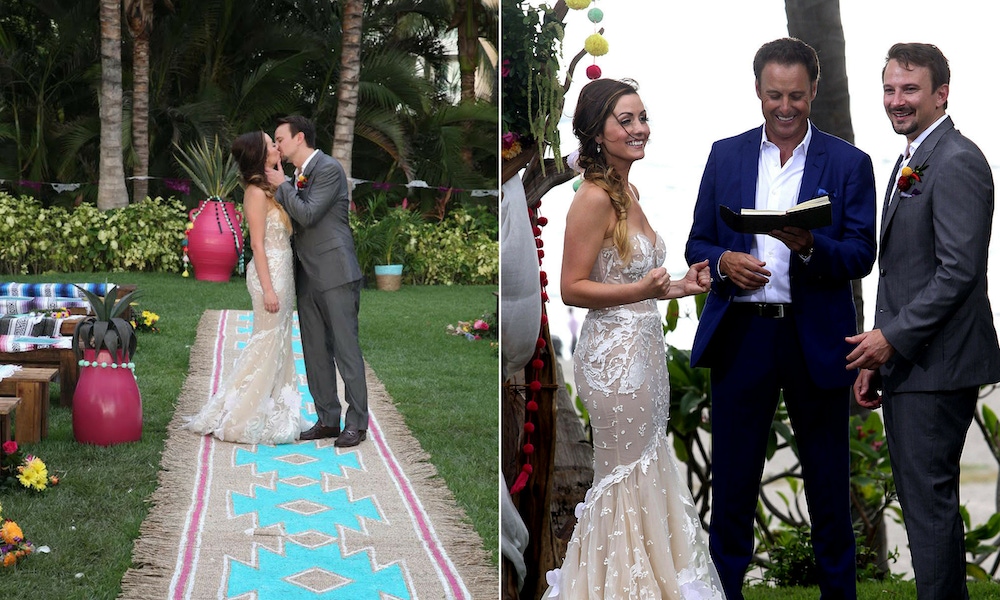 “Love at first sight” was not necessarily the case for the now-happily-married Carly Waddell and Evan Bass. In fact, for a good while, it seemed that the most lasting relationship Carly would develop from the Bachelor franchise was with her BFF Jade, who she met on Chris Soules’ season of The Bachelor. Then Carly met Even on Season 3 of Bachelor in Paradise, and after nursing him back to health after an illness on the show, she fell head over heels toward the end of the season.

They returned to Mexico to the Grand Luxxe at Vidanta Nuevo Vallarta for their wedding, which aired on BIP 4. Carly’s bridesmaids (including Jade, of course) wore bright floral crowns and palm-printed dresses for the tropical affair. The outdoor ceremony, planned by a show producer, featured a vibrant graphic woven rug aisle and seating of raw wood benches covered in colorful Mexican blankets. The reception featured treats like a queso blanco (cheese!) fountain, churros and a funfetti wedding cake. Now ex-cruise singer Carly has dropped anchor with Evan in his town of Nashville and welcomed daughter Isabella.

These weddings haven’t taken place yet but we’re already excited to celebrate these engaged Bachelor Nation couples and their upcoming nuptials. 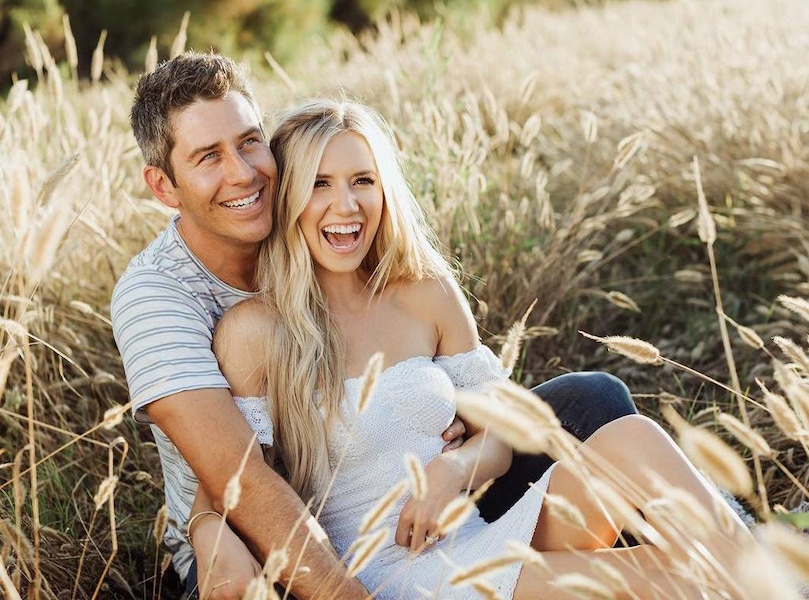 Arie may have chosen recent The Bachelorette star Becca Kufrin at the end of his season of The Bachelor, but it was Lauren Burnham who stole his heart in the end. Arie and Lauren took their time deciding on wedding plans, recently announcing that their ceremony will take place January 12, 2019 at stunning Hawaiian venue, Haiku Mill. While few other details have been finalized, the couple did make one thing crystal clear: there will be no shortage of desserts at their big bash. Lauren just celebrated with friends and family at her bridal shower in Virginia Beach with décor evoking the tropical nuptials they’re planning and captioning photos on Instagram with “We’re getting Maui’d.” 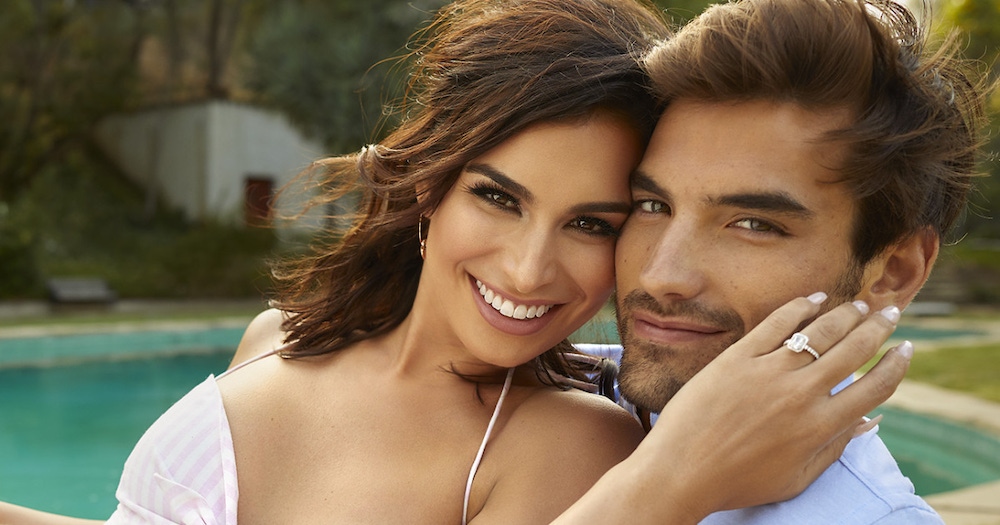 Has there ever been a happier ending for a Bachelor franchise contestant than the engagement of Ashley and Jared? After years of Ashley Iaconetti chasing Jared Haibon, he finally realized his true feelings and proposed to her earlier this summer. The couple has only released one detail about their upcoming wedding, which is their choice to have Troy Williams of Simply Troy plan and design the event. It is sure to be one to remember!

We’ve also got our eye on these couples from The Bachelor and The Bachelorette who could announce wedding details any day now. Look out for news of these potential weddings, and of course, we’ll be sure to keep you updated!