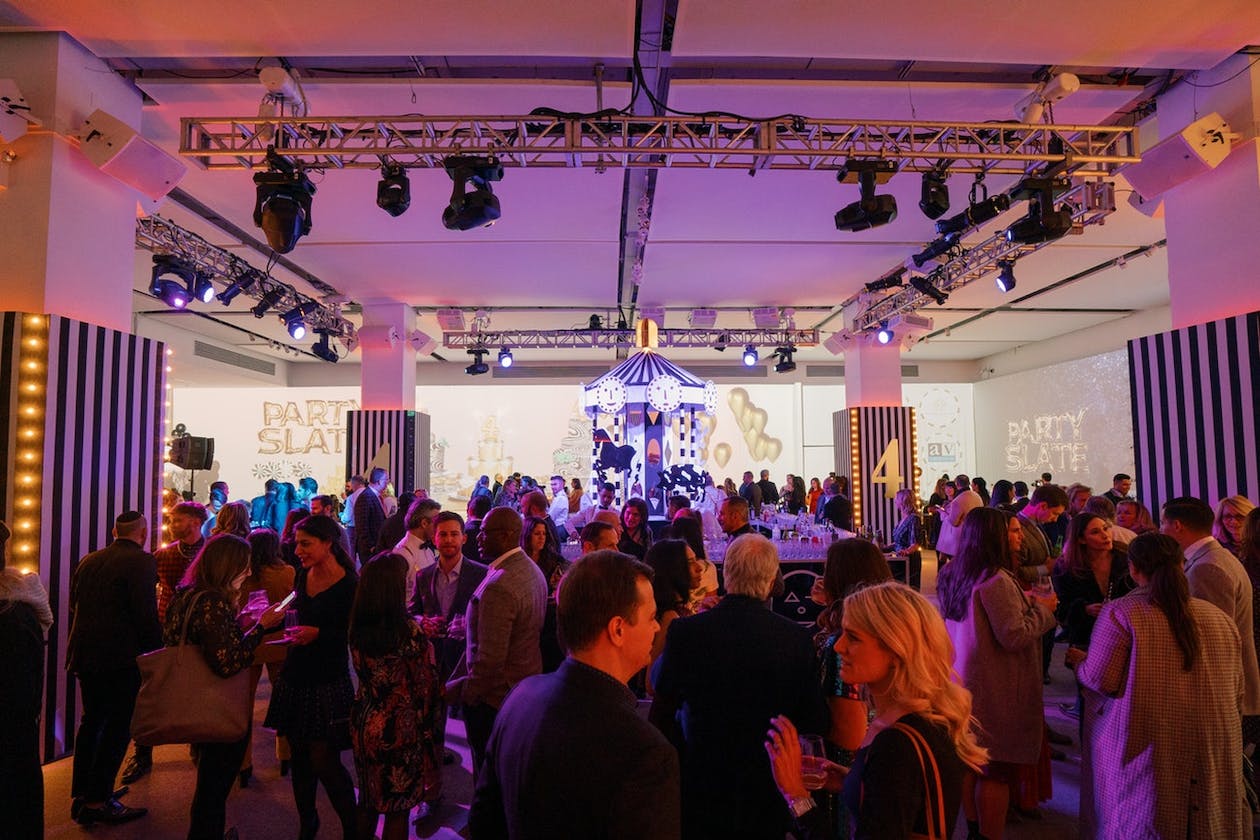 More than 300 tastemakers, influencers, and event industry professionals attended PartySlate’s fourth anniversary in New York on November 20. PartySlate, a website that inspires people planning events and connects them with the leading event professionals and venues across the country and the world, launched its presence in New York less than two years ago. Since then, PartySlate has built a strong network of industry supporters, which led the team to choose the city as the perfect spot for the celebratory soirée. Lining up a top-notch event team was important; Gourmet Advisory Services, a mainstay on every top planner list, worked with the visionary design team at DeJuan Stroud, Inc. to curate an elevated children’s birthday party theme to transform the innovative event space at CNVS.

Claudia Warner of Gourmet Advisory Services says, “The theming came out of round table collaborative talks with DeJuan Stroud. We were all brainstorming to come up with an innovative and chic way to celebrate PartySlate’s fourth anniversary, and we all thought, ‘What about a grown-up birthday party?’”

DeJuan Stroud of DeJuan Stroud, Inc. adds, “My first thought in doing a child’s birthday party was to use primary colors, but it started looking like way too much color. Reducing the palette to three colors — black, white, and gold — allowed me to focus on texture, contrast, and a more graphic-driven design.” Warner notes that “PartySlate’s brand hues were also a major factor,” saying that choosing the company’s palette “was like the stars were aligned!”

Stroud ensured his vision was carried throughout the celebration, starting with the save the date and invitations, both designed by Alpine Creative Group. The talented design team at Alpine leveraged the event color palette, as well as a stunning cake design, to create original pieces that wowed guests from the moment they RSVPed.

CNVS partnered with AV Workshop to feature state-of-the-art projection mapping, which can transform any celebration into an immersive experience. At PartySlate’s fête, video projection mapping of playful faces, a banquet table of cakes, candy, balloons, and a carousel were used to further the theme and extend the design. Stroud says, “The team from AV Workshop embraced my design concepts and bumped it up tenfold.”

Warner says of planning the bash, “We wanted Julie and John [PartySlate co-founders] to walk in and be wowed — to be handed a cocktail (Tito’s and cranberry on the rocks for Julie, Tito’s on the rocks for John) and feel like they walked into their own surprise party!”

To that end, the team curated a celebration that surprised guests, as well, with little details that delighted. “The flow of the party was of paramount importance to us. The way we viewed this event was that while it was obviously an industry corporate event, we wanted it to feel like a social event on every level,” says Warner. “We wanted guests to feel like they were so well-attended to all night that they could let loose with their industry friends and have the best time and leave feeling like no one throws a party like PartySlate.”

Partygoers entering CNVS were greeted with a gold glitter-rimmed cocktail and their first curated photo op — an interactive sequin wall in the event’s chic trio of colors emblazoned with the PartySlate logo from Creative Games Inc. — before walking the fabulous “path to the party.” Stroud says that the curving black and gold path that lead into the main party space, “came from putting myself in the head of my 4-year-old grandson. ‘What would Oliver find delightful?’ He was my muse and inspiration.”

Guests pulled back a gold mylar curtain to reveal a whimsical scene centered by a motorized carousel-topped bar — a nod to childhood at the very grown-up party. Every sense was considered. For a visual feast, CNVS’s projection-mapped walls featured animated graphics, including “PartySlate” spelled out in gold balloons, graphic black and white faces, stripes, marquee lighting, and a carousel mirroring the one in the room.

No party is complete without the perfect musical lineup. To that end, Jordan Kahn of Jordan Kahn Music Company filled the stage with a talented 16-piece band and a full brass section. Jordan himself donned a gold sequined jacket as he led the band, dressed perfectly on-theme. Warner says, “Jordan Kahn rocked the party, building momentum from a sexy cocktail party to a full-blown dance party.” She notes that the floor plan was thoughtfully and deliberately designed without a dance floor to allow guests to watch and listen but not necessarily dance, and still have enough space to dance if the mood struck. “And boy did the mood strike!” she adds.

Culinary stations included fun party fare like a gourmet fried chicken bar featuring Nashville hot chicken and General Tso’s chicken paired with fresh waffles. Warner says, “We themed some of the food to be the kind you would see at a children’s birthday party, but with a grown-up take. Think about a pizza station, and then think about the cauliflower crust pizza we added. Our goal here was to provide enough food so that your guests would not leave to go out to dinner – that they would feel satiated with all the passed and stationary food served all night. The Newman’s Kitchen culinary team really over-delivered!”

In addition to the perfectly-curated sights, sounds, and tastes at the party, interactive elements from Creative Games Inc. surprised and delighted guests. A black-and-white life-size ball pit with beach balls provided a fun hands-on photo op. Guests plunged into the ball pit en masse to toss beach balls into the air — and at each other — for funny GIFs and pics. In another sweet turn, a cotton candy station spun dreamy animal-themed confections, which meant partygoers roamed the party like children at a fair, holding giant spun pigs, unicorns, and more.

Every corner of the room, reminded guests who they were there to celebrate, with abundant and stylish branding appearing on the walls, columns, pillows, and more. Because the brand colors for PartySlate were used in every element, the soirée felt like a chic embodiment of the brand itself. And with its tagline “Memorable celebrations start here,” it was fitting to host such a memorable event.

One of the more meaningful (and definitely memorable) moments of the evening was a presentation of PartySlate’s 2nd annual Impact Award, an award given to a member of the event community who has pioneered a give-back initiative and inspired others. Last year’s winner of the inaugural award was Paige Chenault of The Birthday Party Project. This year, PartySlate recognized Kareem Wells, owner of Chicago-based Flow Entertainment, Inc, and widely known as “the king of Mitzvahs” for his rousing and touching MC work. Wells’ K.W.O.E. Foundation works with Chicago’s youth to instill hope, purpose, confidence, and opportunity through a combination of music and motivational speaking. Upon presenting the award, Julie Roth Novack, PartySlate Co-Founder and CEO, noted, “Kareem may be the ‘king of mitzvahs’ but he also embodies the very literal idea of mitzvah — which means to do good deeds [in Hebrew] — with his foundation.”

Wells spoke about his own rise from street-level drug dealer to music producer and business owner, and he had the assembled crowd enthusiastically repeating the K.W.O.E. values after him: Know your genius, Work to be unstoppable, Own your actions, Explore the world. Solid words to live by, regardless of age or experience. Guests were inspired by his mission-critical business of orchestrating parties with purpose for Chicago’s youth.

Partygoers spent the evening dancing, noshing, and lounging — on sleek modern furniture from Taylor Creative Inc. and Luxe Event Rentals that fit perfectly with the elevated vibe of the celebration. At evening’s end, sweet treats included mini birthday cakes and hot chocolate shooters with mini churros and a funfetti rim. Guests left with bags of salty and sweet popcorn to enjoy on the way home (or for breakfast the next day — we don’t judge).

Ensuring that the PartySlate team was well-rested and PartySlate partnered with InterContinental New York Barclay to ensure the entire team was well-rested both before and after the celebration, and the makeup and hair miracle-workers from Beautini got the team party-ready. Throughout the celebration — present but never intrusive — was the amazing photography team from Fred Marcus Studio, who over-delivered with gorgeous images delivered way ahead of schedule. Meanwhile, Hart Studios captured every fun note and interaction of the evening for a fun video marking the occasion.

PartySlate will continue its exciting growth, with upcoming launch events in New Orleans, Orlando, and Las Vegas, in addition to exclusive celebrations in its 14 already-established cities. 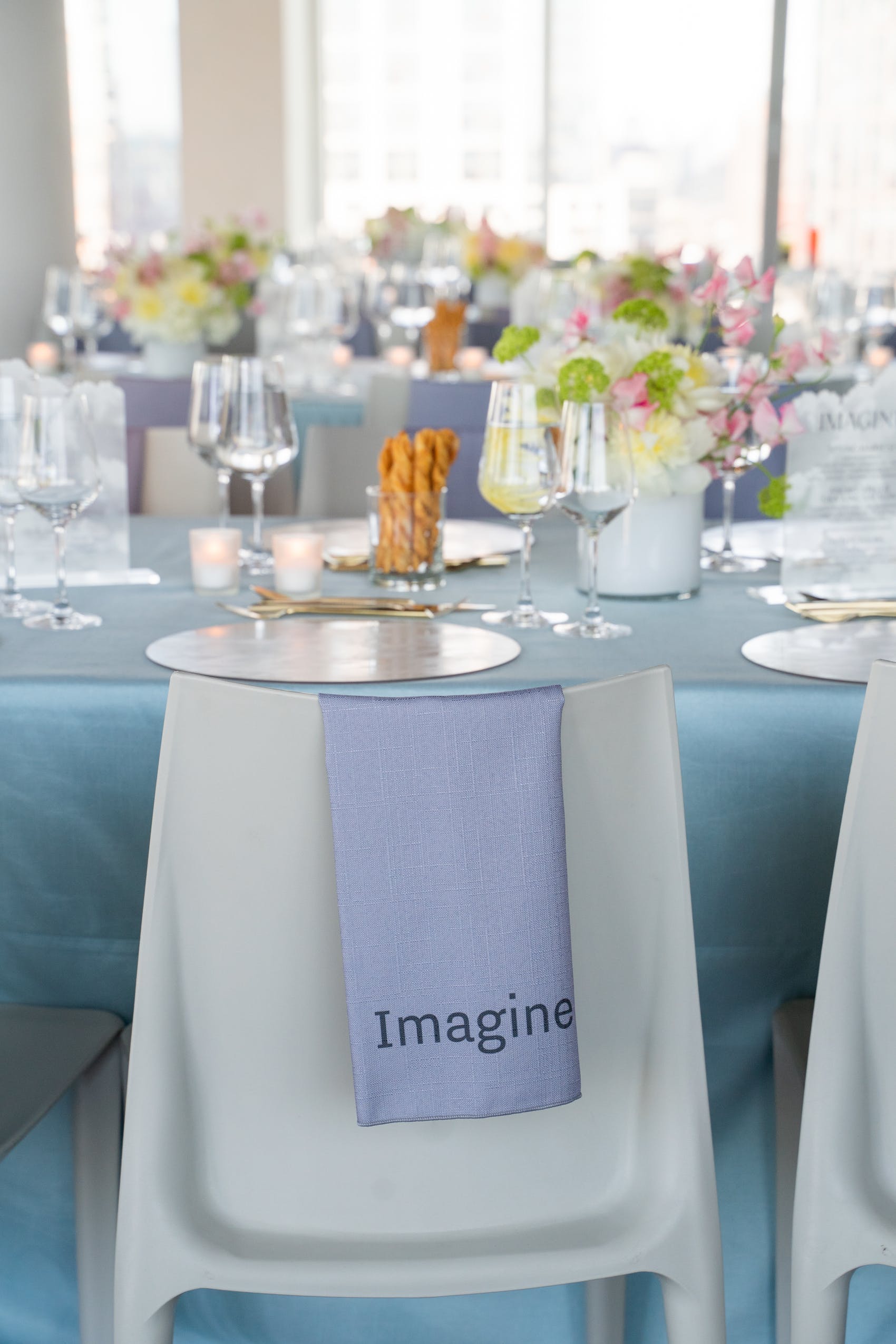 We love that their photography is truly an art and something that you will always cherish for years to come. photographer: Fred Marcus Studio

Get Inspired by Creative Bars & Lounges