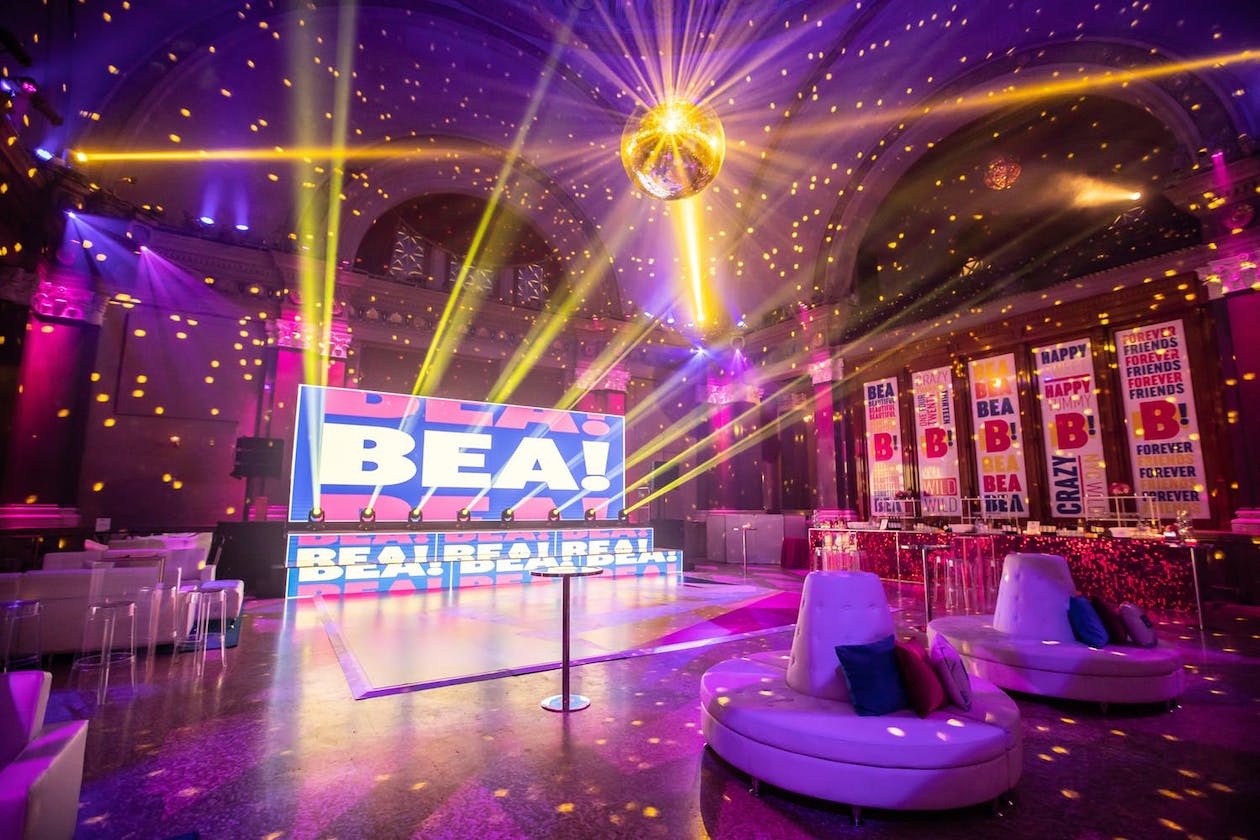 When it comes to planning a celebration, there is perhaps no more difficult client than a teen — make that your own teen, and you’re in for a world of strongly-held opinions and potential eye rolls. Luckily for seasoned event planner, Florie Huppert, she had already planned dozens of super-personal, meaningful Bar and Bat Mitzvah celebrations, including her own son’s event in 2017. In fact, as the founder of Florie Huppert Design, Huppert is one of the most accomplished Bar and Bat Mitzvah party planners in New York, so she wasn’t daunted by the prospect of having her own daughter as a client.

Huppert describes the planning process as full of “challenges and joys”, and she notes that kids are consistently opinionated about the same things: swag, photo booths, and when the presentations are happening. Huppert says, “Conceptually, planning an event like this is so big for any kid, that I only gave her the information she really needed to know,” says Huppert.

Expert Advice on Choosing a Theme

“What’s really important is that every event feels and looks like the culture of the family. The theme and any logo or branding should embody the kid being celebrated,” says Huppert. It’s about more than getting kids to articulate their interests—meaning Huppert doesn’t necessarily latch on to kid’s activities like tennis for a tennis-themed celebration, when planning. Instead she attempts to create a celebration that feels authentic to the spirit of the child, and family, being celebrated. “For inspiration, I pay close attention to the stuff they circle back to as we’re planning,” Huppert says.

Long before the celebration itself, the Huppert mother-daughter duo settled on a theme, which they then employed everywhere from the invitations to the take-home gifts. Inspiration struck when Huppert was walking by a mural in Williamsburg, Brooklyn; it said: “Be Optimistic.” She says, “I stopped in my tracks and took a picture. I knew that was it.” Huppert’s daughter’s name is Bea, and the more the planner considered the idea, the more she realized how perfectly it fit with her daughter’s spunky, fun-loving, generous personality.

“We decided to use the play-on-words with her name to send happy messages directly to our guests. You be happy, you be wild, and so on. It’s a message for all of us from Bea.” Of course, Huppert personalized the messages by tweaking them to “BEA Happy, BEA Wild, BEA Sweet, BEA Crazy,” and so on, honoring the core theme of “BEA 13.” At PartySlate, we love when kid’s celebrations are young, happy, fun, and bright—the perfect expression of childhood itself; add the perfect play on words and we are, well, BEA–witched.

A High-Tech Solution Fits with How Kids Communicate

Huppert elected to use a video as Bea’s save-the-date announcement, and she started the “BEA…” theme then. Kari Otero, of Kari Otero Photography, “worked hard to figure out how to make the process easier,” says Huppert. “It’s hard to mass-mail a video without an expensive infrastructure, so we decided to send out our message via text and Snapchat.” In this case, the delivery system was another inspired stroke; as any parent of a teen knows, Snapchat, TikTok, and YouTube are the languages they speak, so this save-the-date was a real attention-getter.

“Bea is a hugely colorful human,” says Huppert of her daughter. “She’s tiny with an enormous personality and basically radiates rainbows.” Creating a colorful celebration was a necessity. Huppert began by looking at colors that she loves together until she settled on a bright, electrifying palette—with Bea’s approval, of course adding big graphics and gorgeous portrait shots by Otero.

Huppert is no stranger to the world of impression-making graphics. Once upon a time—in college and even before—she worked for Pentagram, one of the most highly regarded graphic design firms in the world, responsible for many of the branding and identity designs we know and love, like the new Dixie Chicks album art, the Fischer-Price toy logo and new-media Slack’s corporate identity. “Graphic design is important to me and I really focus on creating the right branding for events,” says Huppert. She wanted Bea’s celebration to be colorful but also dramatically big, with mega-graphics that were “bold, loud, and clear.” Huppert was especially inspired by Paula Scher’s work with The Public Theater.

When it came to choosing a space that could showcase oversized graphics, as well as provide seamless guest flow from one element of the celebration to the next, Huppert knew she needed a venue that offered multiple spectacular spaces. Enter Weylin. The space, originally built in 1875 as the Williamsburg Savings Bank, is grand in scale and detail, featuring soaring ceilings, a frescoed dome and incredible period décor. Huppert says, “Weylin, even empty, is the most magnificent space in NYC.” We agree—in fact, PartySlate co-hosted a Vera Wang Spring Bridal launch in the glorious space last year.

When Bea got her first look at the decked-out space, Huppert says she “freaked out.” It was, after all, the culmination of all their planning and collaboration, and was, literally, her dream come true. Guests knew they were in the right spot when they arrived at Weylin with its exterior lit in glowing hot pink and neon blue, which set the scene for the vivid celebration to come. Partygoers arriving at the main staircase were ushered into the first domed space; adults stayed put for cocktail hour while kids were invited into the lower level.

“We decided to serve the majority of the food in the cocktail space, then left it open for grazing the whole night,” says the planner. The fare included a massive sushi bar, a Korean food station, Mexican, and Greek stations, and more. Huppert says of the international choices, “We crafted a naturally gluten-free menu and leaned toward culinary choices that made it easy to accomplish that. I felt that Bea, as a celiac, should be able to eat anything at her party on her day.”

Pride Caterers ensured that even items not typically gluten-free, like the meatballs at the Italian station, were crafted with care so that Bea could fully enjoy her celebration. Even local fan-favorite Dinosaur BBQ made an appearance and, in an inspired cultural touch, a latke bar accompanied the kiddush.

Merging the Adults and Kids into One Dance Party

The beginning of the party found kids downstairs, enjoying a huge beauty bar, custom cubbies, gaming, elaborate themed-food stations—and, of course, presentations from friends to the new Bat Mitzvah. Then they were invited to join the adults upstairs for the dramatic reveal of the main party space. A wall lifted up into the dome revealing an immense room featuring a gorgeous bar adorned in florals by Enza Events, swanky lounge areas from CERF and Bubble Collection, as well as a huge dance floor.

“I like a freeform party with lots of dancing,” says Huppert of her decision to forgo some of the formalities usually associated with Bar and Bat Mitzvah celebrations. “There was a montage and speech but mostly just love and laughter, in keeping with our family’s culture of having a good time and enjoying each other,” she adds. And enjoy they did in front of the massive video wall from Fusion Productions. In fact, Huppert confirms that it was “the biggest video wall Fusion had ever built”, and that in planning the dance space she was inspired by concert staging. The high-tech addition featured intelligent lighting embedded in its base to dramatically illuminate the dance floor. Total Entertainment kept the dance floor filled with thrilled partygoers while Brooktech ensured an enveloping sound experience.

When One Party Ends, Another Begins

“At dessert time, we had dancers clad in mirrored disco-ball heads arrive to ‘Pied Piper’ the kids back downstairs where the space had been transformed into a neon afterparty,” says Huppert. This second party included a new DJ with a new setup as well as blacklights creating a fun glow. The kids changed into their “BEA Sleepy” pajamas and enjoyed desserts (gluten-free, of course) from Thomas Preti Events to Savor.

Upstairs, adults boogied to a dance set of early 90s and pop—Huppert always makes sure that at multigenerational celebrations, everyone gets their favorite music—before spending their last hour downstairs with the kids. “It’s such a wow for guests to enter a whole new space, especially at the end of a celebration,” says the planner. Another little detail that made the evening seamless was the transport of all coats to the bottom floor to ensure a smooth exit.

An Evening to Enjoy — and Remember

Throughout the celebration, Kari Otero, Nathaniel Johnson Photography, and Courtney Collins Photography captured every beaming moment. Guests were able to take home snaps that night thanks to the Shake and Share Media photobooth, which was built in the vault of the bank. The TikTok booth allowed friends and family to create and share fun moving images.

In addition, guests left with custom swag. In addition to their PJs, guests rocked “BEA Happy” and “BEA Wild” hats and “BEA Crazy” tees, like the one Bea herself pulled on over her dream dress for the after-party.

Now that the celebration has ended and she has all the photos for memories, Huppert feels overwhelmed with gratitude. She says, “I loved this party so much—I have so many amazing industry friends who brought their A+ game to make this the party of Bea’s dreams. Everything was pretty spectacular.” 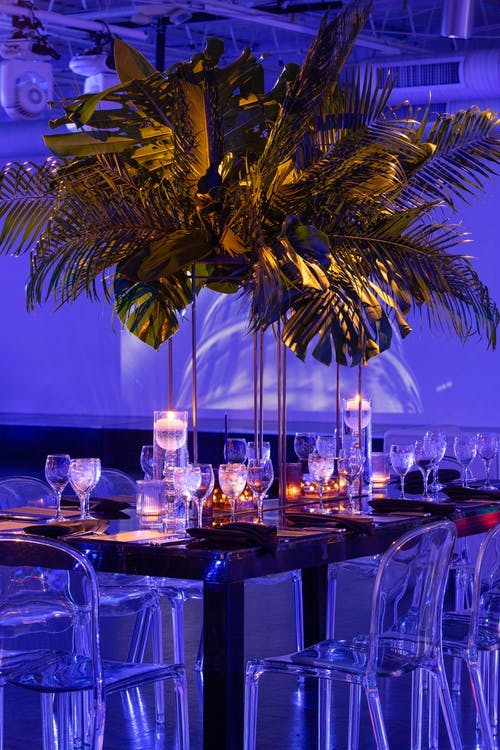 Enza Events is a spectacular design company that specializes in floral décor, custom furniture, and elegant lighting. we appreciate their team’s collaborative process with their clients in order to create a dream event that will be remembered forever. photographer: Gustavo Campus

Enza Events is a spectacular design company that specializes in floral décor, custom furniture, and elegant lighting. we appreciate their team’s collaborative process with their clients in order to create a dream event that will be remembered forever. photographer: Gustavo Campus